Adam Neate vs Art of the State

This was a little project I did back in the early 2000’s. Adam leaves his paintings on the street in London for people to pick up and take home if they like the look of them. By the time of this project he had  distributed over a 1000 in this manner (along with some given away at exhibitions etc). I’d never found one though so asked him if he could send me one and said I’d go around taking pictures of it in various locations in London. He kindly gave me this painting on a piece of board.

First location was a Metro newsstand – I had to keep a close eye on the painting while I took the photo! 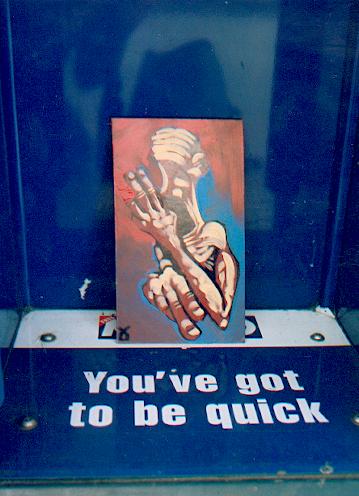 I get my tube ticket as normal and it seems to me that the guy behind the counter is having a real bad day. I look at the painting again and I see the same expression as the counter guy so I take a picture there and then at the next window along. It came out better than I expected. This corner is where somebody sleeps at night and passing by I think of the person and the picture seems to sum up this existence all of a sudden. So I figure it’s as good as a place as any to take a photo but I get a slightly uneasy feeling as I take the picture that I’m doing something wrong. I mean it’s OK for me to swan around taking pictures but how much use is that to the person who is going sleep here tonight? I feel like I’m exploiting someone’s misfortune and move on. Selfridges has reinvented itself as the epitome of cutting edge cool. It’s now a far cry from it’s old ‘Grace Brothers’ image. They like to showcase what they consider to be the most hip artists and use the kudos it all brings to make everybody connected that little bit more richer. I wondered how far Adam would get distributing free art in a place where you can probably pay six figure sums if you had the cash. So I put the picture up in Selfridges window display and watched people check it out. If I’d thought about it in advance I should have added a ridiculous price tag but then that would have ruined my plan for the visit to Tate Modern. Heading South I couldn’t resist taking a photo on one of London’s top new tourist attractions: the Millennium Bridge. I now wondered if the painting was yawning?

Now I’m inside the Tate Modern and I’m thinking that there should be a change of featured  artist. I’ve got nothing really against Tate Modern _ if you’ve got a gallery you’ve got to fill it with something and it’s a great building. It’s just that I think there’s too much missing. For example street art (for want of a better term) and graffiti don’t seem to be represented. It may just be me but I’m thinking that they should be in there as a representative of a major style of the 20th century. Maybe  the reason they are excluded is because you don’t have to pay to look at them so they are considered worthless. Anyway, I thought I’d charge a pound a ticket and get Bloomberg to sponsor the event! Leaving it up for just a couple of minutes I saw a couple of people check out the advert then wander over to the inquiry desk to check on ticket availability for the Adam Neate audio tour. OK, time to put on a show. I fix up the painting with a fake explanation and sit back to watch the results. I was originally more concerned with security chucking me out for putting the picture up. As people have a look I suddenly realise taking it down is going to look even more suspicious to the gallery viewers. So to the bemusement of some German tourists I finally walk up, take the painting down and put it backing my bag and head upstairs to take a picture with St Paul’s in the background. Just as I’m putting it up the gallery alarm bells sound throughout the building. It’s probably nothing to do with me that the entire Tate is being cleared (I guess it’s some bored school party setting off the fire alarm) but I decide to cut my losses and leave the building in the crowd. In the end I really couldn’t face giving this painting away so it’s had further adventures since.