With each letter taking around an hour to complete it took Ben several visits from his home on the coast to construct the series. Further along the road is the first word comprised of letters painted on shutters.

Speaking to the Observer Ben said “Spraypainting a shop shutter turns an ugly, boring thing into something interesting and colourful. I think you’d have to be a pretty negative person to find fault in it”. It’s hard to disagree with that _ especially when you see everyone who walked past on the night these photos were taken stop and squeal with delight when they realised what they had unexpectedly walked into.

More photos of work by Ben Eine here 1 and 2: 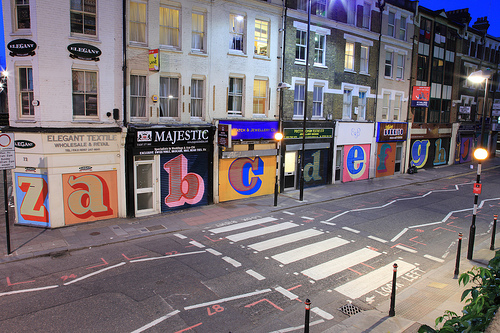