street art archive copy                             Blek Le Rat _ Getting Through The Walls _ Sybille Prou and King Adz (Thames & Hudson)  I’m not even going to mention that quote that gets trotted out every time Blek Le Rat’s name gets mentioned. It’s in this book and rightly so but…yes, Blek stenciled rats before long before a certain other well known graffiti artist but that is pretty much a case of great minds thinking alike rather than any kind of direct link.

Blek first came into contact with graffiti in New York back in 1972 but it wasn’t until 1981 that he first started using his trademark stenciling for his work. Since then his work has appeared all over the world but its taken until 2008 to get the reasons behind many of his most iconic images down in this book. You get to understand why he has used images of Diana and Warhol in London and Paris and  see him at work ‘walking through walls’ travelling all over the world. There’s 128 pages of excellent photography documenting his work. It’s taken a long while to appear but finally we have the definitive documentation of Blek Le Rat. 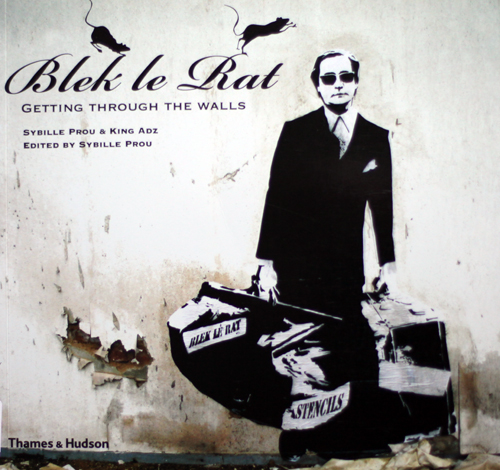 Blek Le Rat _ Getting Through The Walls book