street art archive copy                             Graffiti Argentina _ Maximiliano Ruiz (Thames and Hudson) Argentinean graffiti on the world stage is a relatively recent phenomena. A lack of decent paint and communication hampered its growth and even now it remains a predominantly Buenos Aires based culture. Initially influenced by fellow South American writers from Brazil it has gone through a rapid development to create its own vibrant style many examples of which are captured in this volume. Prime exponents of graffiti in Argentina such as Jazz and Dam speak directly about their influences and their work. Some of the pieces are breathtaking in their scale and audacity _ although graffiti remains illegal in Argentina it would seem writers are often left to get on with things. All of which gives free rein to huge pieces occupying the walls of the cities buildings. There’s quality work throughout this book which takes the reader on a journey through the city via walls, trains and finally sketchbooks full of vivid graphic mayhem. 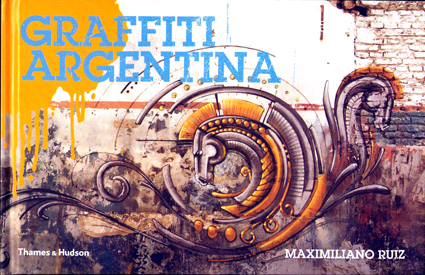