Arch manipulator, scoundrel, chief propagandist, provocateur, Shepard Fairey is the man many hail as the originator of the modern urban art scene and is an undeniable phenomenon. First coming to prominence in 1989 with his now ubitiquous ‘Obey Giant’ sticker campaign, the self styled phenomenologist has since gone on to become one of the most recognisable artists of the early 2000’s.

His work, a mixture of parody and protest, serves to subvert the very medium to which it attaches itself. Wall paper posters adorn advertising boards that in his own words ‘market nothingness’ while large scale posters with the simple message ‘Obey’ stir the bewildered masses. His unique use of stencils, collage, photography and painting have led to collaborations with among others, DJ Shadow, Interpol, Smashing Pumpkins and more recently the poster art for the Johnny Cash biopic,  ‘Walk The Line’.

In more than a passing reference to the surveillance culture of Orwell’s 1984, Shepard Fairey brings his new exhibition ‘NineteenEightyFouria’ to London’s Stolenspace. Comprised of a range of artworks, from large scale multi media installations to smaller album screen prints Shepard’s artwork both scrutinises and distorts the narrative of the modern American Dream. Commenting on underpinnings of what Shepard terms the ‘capitalist machine’ it aims to critique those who support blind nationalism and war. Fairey addresses monolithic institutional authority, the role of counter culture, and independent individuals who question the cultural paradigm. 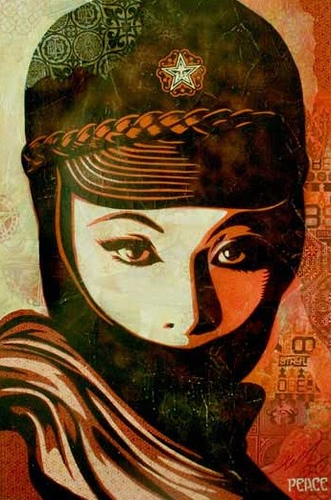