So here’s the third installment in the Untitled series. Initial impressions are that this volume looks quite different from the previous two. The words ‘This Is Street Art’ appear on the cover much larger than the actual ‘Untitled III’ name _ I guess this is to make it clearer than the last volume what the actual contents are. Inside though it’s only a slight variation on the previous two.

It’s quite Banksy heavy in content _ there’s over 40 images of his work in the book but that’s OK, the guy simply knocks out as a ratio more noteworthy images per street than anybody else. The long running feud with Robbo gets a thorough dissection in the ‘Bunfight At The Camden Canal’ pages (but oddly enough there’s no picture of the original ‘fishing boy’ piece). What seems like pretty much all the recent action from Banksy’s tour of America is also featured.

Elsewhere it’s the normal mix of top quality street art photos and acerbic, witty and sometimes downright obtuse commentary all delivered with a unique flair. Events given in depth coverage include the Agents of Change ‘Ghost Village’ project and the Fame Festival in Grottaglie, Italy. Elsewhere the images and artists chosen mean this book very much charts its own path. Some high profile but ultimately vacuous artworks are ignored to ensure the inclusion of more original and thought provoking work. Think of the editorial policy as operating a kind of bullshit detector and you’ll understand what is and isn’t likely to be included.

Sod the above third album analogy _ why change a winning formula? 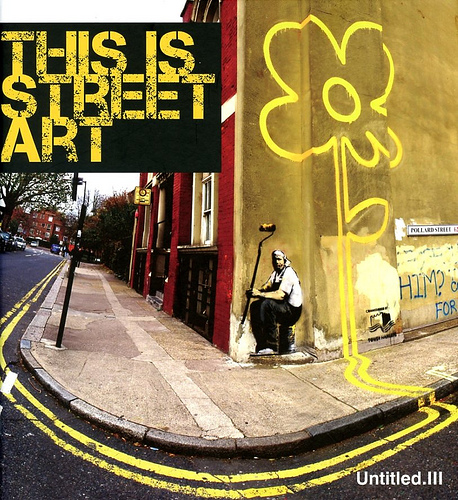