If I was pulling together a film about graffiti I’d make sure it included a long list of essentials. Racking paint, inter crew beef, slow Joe getting caught by Security, sketchbooks, girl trouble, the old school versus the new school, drips, markers, no stencils, house searches, all city, fence hops, paint drops and hip hop _ oh, and a whole train covered in graffiti. What I would forget to put in, however, is any kind of a story. Florian Gaag’s ‘Whole Train’ makes no such mistake. Yes it’s got everything you’d expect but its also got the human element nailed down as well. From nervous newbies, to questioning mothers and a bit of unorthodox babysitting its the characters and back story in this film that hold your attention long after you’ve kind of got used to watching spray paint creating lines on steel. The issues addressed here through the lives of four young men are exactly the same for graffiti writers the world over. Common sense says there is absolutely no need to break into yards to paint at night but for some passion and the adrenalin high smashes rational thought. It’s called living, makes your hear beat faster and pays no respect to what others might think. It’s all consuming.

Any more of a review would give too much away, suffice to say this is a great film by someone who knows his subject deeply enough to keep all but the saddest pedants happy. I should also mention that as it’s a German flick it’s subtitled in English but fear not, that just means it demands and gets your full attention. You may not understand the actors language but the dopest kick of a soundtrack featuring the likes of KRS One more than makes up for that. The extra ‘The Making Of’ chapter is a really good insight too, the actors did their homework alright. 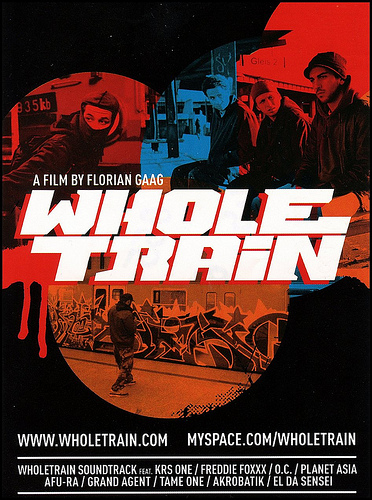