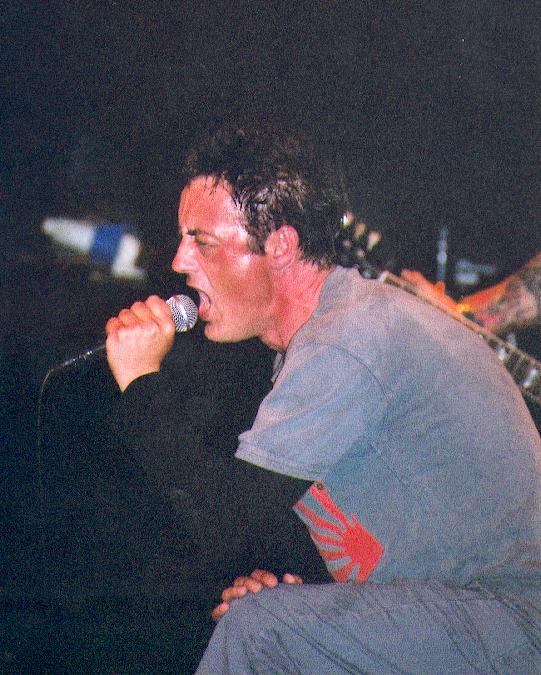 A message from Pete Rose (Icons Of Filth guitarist) At 3.10 a.m., Saturday October 23rd 2004 the vocalist for Icons of Filth, Andrew Sewell, better known as "Stig" passed away. Icons of Filth were playing a gig in a squat in Hackney when Stig complained of feeling unwell and we cut our set short so that he could go outside to get some fresh air. Shortly afterwards he collapsed and died, according to the hospital most likely from a brain haemorrhage but possibly a heart attack. He liked a drink as much as anyone but on this occasion had only drank 4 cans of lager. He didn’t touch illegal drugs of any sort but within 4 hours of his death rumours surfaced about a possible heroin overdose. These rumours are of course ridiculous and insulting to a man whose body was not yet cold. What is the matter with some people? Anyway, when you’re having a drink tonight, think of Stig and remember a man who lived life on his own terms but cared immensely about the world around him. Cheers, Pete. (the quote above is from the now defunct London Punks website) _

A message from Steve Cotton, author of this site

I’m no good at writing down what I’m feeling at the moment _ a sense of a great loss. Stig’s lyrics meant so much to me and so many other people that it’s hard to comprehend that there will be no more and only what there is. Of course Stig never really understood what an effect his lyrics had on other people. From my limited conversations with him I don’t think he ever quite realised the sheer numbers of people he had touched through his words _ and that is in part why he was such a example to us all. He didn’t want to make money in T shirt merchandising, CD sales and the rest, he just wanted to make the world a better and more caring place for both people and animals alike. He was proud of his kids and would always open up his conversations by asking after mine. His lyrics were not just empty statements to sell records; they explained the values he lived his life by. In all my dealings with him he was totally open and honest and a real breath of fresh air after meeting so many individuals who were a let down in ‘real life’ by being so self centred on their bands career.

Stig was truly flattered when he stumbled across my website, he couldn’t believe that someone would go to all the trouble of recording all his lyrics and his bands music and artwork. He sent me his only copy of the Icons new CD that he had at the time and promised me a beer. We never met up for that beer, something I now deeply regret bitterly.

My heartfelt condolences go out to his family and the rest of the band. (Steve Cotton, artofthestate)