The market itself started out in the 13th century with the Duke Of Bedford developing it into London’s first formally laid out open square in 1630. The central building it is so famous for now did not appear until 1830. It carried on as a market until the 1960’s when traffic congestion became such a problem that a new location further South had to be found.

Developers were keen to flatten the market buildings as they had done with the Euston Arch and the Coal Exchange along with countless other buildings in London but these demolitions had enraged people to the extent that they were now organising to save key buildings from destruction. Originally the Greater London Council had planned to demolish three quarters of the buildings _ in part to add in new road capacity. The fight back started in 1971 with a massive campaign utilising diverse tactics from music to protest marches to attacking the then Prime Minister Edward Heath. It led to the resignation of the GLC’s chief public proponent of the flattening scheme, Lady Dartmouth, as she felt she could no longer support it. The GLC’s plans were truly thwarted when 250 of areas buildings were given protection via being given ‘listed’ status by Secretary of State Geoffrey Rippon in 1973.

In 1974 the market ceased trading but it was not until 1978 that it was decided to convert it into a shopping centre which opened in 1980. Whilst the buildings may have been saved the community that had existed there was lost forever. 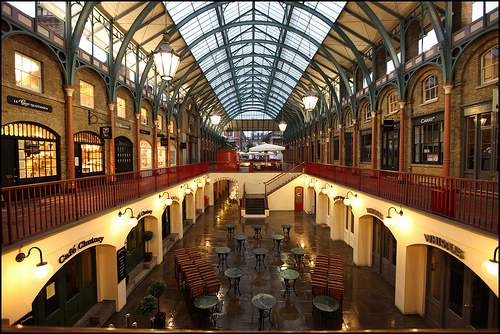