Northala Park                                                       Northala Park, West London Northala Park opened to the public in 2008 and right from the start included many ideas and concepts that were both forward thinking and cost effective. There are four large mounds which are constructed with the spoil from nearby redevelopments for Wembley Stadium and the Westfield Shopping Centre. Cleverly the park was in part paid for by charging these massive construction projects for taking away their unwanted material _ a partnership the developers were only too happy to work with as it reduced the distance it had to travel. The four hills also serve another purpose _ once on the Southern side of them noise from the nearby A40 roadway is virtually eliminated. Climbing up the spiral walkway which takes you to the summit of the tallest mound is an intriguing experience. As you walk around you are alternately presented with the sound of traffic and birdsong in equal measures. From where this photo was taken there is actually very little disturbance from the road. The view from the highest point is also well worth the short climb with a clear sight of the London skyline in the distance including the Shard, The Gherkin, The London Eye, BT Tower and the arch of Wembley Stadium.

Northala Park has continued to develop. It now boasts a smart modern cafe overlooking a series of ponds, adventure playgrounds for the kids and what seems to be an increasingly diverse selection of wildlife. 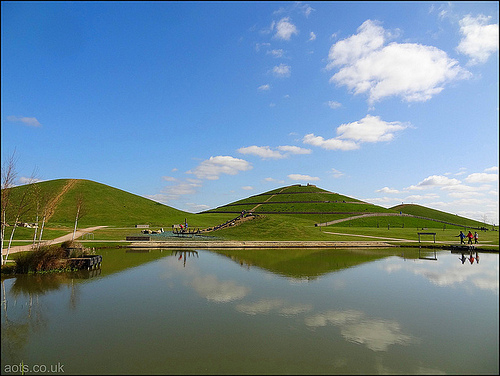