Crouch End Station The last passenger train stopped at Crouch End in 1954 marking its end as a station which began back in 1867 as part of the Finsbury Park to Edgware line. Branches of the line also served nearby Highgate and Alexandra Palace. At one time it was planned to incorporate Crouch End into the Northern Line but whilst other stations such as Mill Hill survive as part of this route the station was forced to be run down through a lack of investment and eventually closed after passenger numbers declined.

The line itself remained open until 1970 when it too was finally closed, the tracks removed and the passage turned into the Finsbury Parkland walk.

Today the platforms are still clearly visible but nothing else obvious remains of the station structures. 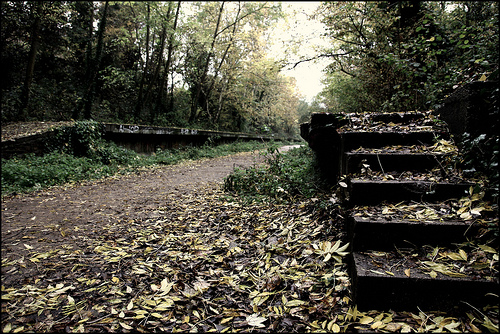 For a hi_res copy of
this image click here