Vice Squad played a real blinder. Fast and furious from start to finish and hugely entertaining!

Now a fair few bands from ‘back in the day’ just crank out the old hits and I’m not saying that’s necessarily a bad thing but Vice Squad have more than their fair share of recent classics too. Just have a listen to later songs like Sniffing Glue or Spitfire to see what I mean. They played a confident, rocking and fun set to an admittedly pretty sparse crowd. Up against four other punk gigs in London on the same night and with the rain and wind howling outside it was perhaps understandable that the turnout was poor. If Vice Squad cared it didn’t show. They pretty much individually dedicated a song to anyone in the audience who was visible from the stage with plenty of good natured banter. It’s this affinity with their audience that’s so refreshing. Vocalist and guitarist Beki Bondage understands the underground and what it means to be an independent band. That whole punk DIY ethic lives on. I ordered a couple of CD’s from the band after the show and they turned up within two days personally signed by Beki!

Set highlights included early classics such as Last Rockers, the aforementioned Sniffing Glue and a quite frankly ferocious version of Ace Of Spades. Drummer Violet The Cannibal was an entertaining, technically perfect, and at times seemingly bonkers whirlwind throughout the set while Paul and Wayne lay down some thunderous riffs and rhythms. Beki herself now possesses a powerful voice, certainly much stronger than on the early records. She plays rhythm guitar too on many of the songs. As a unit they are firing on all cylinders and you can’t ask a group for any more than that. I don’t know if Vice Squad will venture back to Kingston any time soon but for anyone there it was all the more special for being such a small intimate gig. Personally I’m going to be looking out for them playing again anywhere within striking distance. Great night. 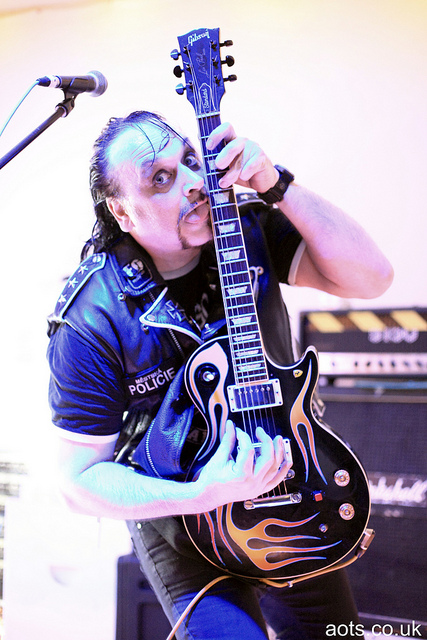