The voice of a second generation? UK Resist home Some of the older punkers amongst you will remember the Blitz way back in the early 80’s blazing into the charts (top 30 albums and top 75 singles). Some of you younger punkers may have heard the name touted alongside the name Oi! _ the movement that was created by Sounds journalist Garry Bushell. Bushell has now has moved downwards to spew crap in his Sun TV column appealing to the lowest common denominator in his banal way. Blitz, on the other hand, are on the way up and if you thought they were happy with their Oi! name and the dumb skinhead tag we suggest you read on and adjust your prejudices. Blitz were and still are as punk a band as any you are care to mention. Never surrender indeed. Interview by Steve Crisispoint with Nidge.    On that bowler hat…"We only did one photo session with the bowler hat but it got printed everywhere. Carl hated it, we couldn’t stop laughing".

Who is left out of the original Blitz? What happened to all your past members, what are they up to now? I am the only original member. People ask why I don’t try and bring Carl back in. I would have thought the answer would have been obvious, "Telecommunications" my arse hole! New Age was the last song I wrote for Blitz. When we split I was going to carry on Blitz but Carl was ready to record first. He was hoping to use the Blitz tab to sell records whilst reaching a totally different audience, the dickhead.

Did you follow what has happened in punk and do you listen to any of today’s hardcore bands? I lost touch with the whole punk scene like so many others because the music press is so fucked. I didn’t even pick up on M.R.R. until last year. All the people I know who were into the punk scene in 80’s have no idea of what is going these days but they still listen to their old records. The main problem is that everyone is talking about a punk revival with little attention going to new punk. I have that problem with Blitz. Some labels have asked to release old stuff but no one has offered me a new EP.

What do you think of the Oi! tag now, it seems to be largely dominated by racist skin bands, Was being viewed as a "right wing" band because of the Oi! tag a large hindrance? When looking at your lyrics would prove you no such thing. Ha, Ha, the great Oi! swindle. In 1980 we were like an anarchist punk band. We played our first gig in Bradford with Discharge in front of around 20 punks. Things were looking real bad for punk so Carl and the drummer changed their image and all of a sudden Gary Bushell thought we were the new Clash. With the All Out Attack EP we were suddenly labelled as Oi!. We were just so relieved to have a single out after three years of being ignored (formerly we were known as XS rhythm). Then Bushell started to rant on about The Adicts great image so we made Carl dress up in this Clockwork Orange style garb with a big stupid looking bowler hat. We only did one photo session with the bowler hat but it got printed everywhere. Carl hated it, we couldn’t stop laughing. Carl and his bowler made the front page of Sounds magazine. We laughed again and released "Never Surrender". We never had a problem with all that racist crap because our roadie / driver was a six foot two inch black guy who we grew up with.

Do you have any contacts with No Future or any control over reissuing past releases. Was there a comradeship between the bands on No Future ? Most of the bands didn’t want to be seen to be 0i. For example The Testies said Oi! was shit and the Partisans claimed all Oi! bands were just bald punks. No Future is now owned by Cherry Red. They have just done a deal for the release of a singles C.D. We always got on well with the Testies. We had a lot in common, most of it in cans. None of us like the Oi! tag. We told BusheII it was dumb. So he came up with an even dumber tag ‘SKUNX’. We just yawned and released "Warriors". We set fire to the bowler and used Carl’s picture as a dart board.

What do you think caused the huge split in Blitz. Do you think if success came your way second time around you’d handle it better? Carl wanted to take a completely different direction. I could understand him being pissed off by the way we were misunderstood by wankers like the NME but I didn’t feel the need to change for the press’s sake. From the start we said “Take us for our music and nothing more”. And they did, all kinds. No matter what labels the press tried to pin on us we broke a lot of barriers with ‘Warriors’, but we were not prepared for all the attention and we never had any management. Yes, I could handle it all now, if only ……

UKR: A lot of punk bands reforming now see to be doing it just for themselves (i.e. their pockets!) Do you think this takes the piss out of what they had to say in the first place? I wonder whom you mean. What annoys me most is that I made a big effort to record a new album to show that I wasn’t just cashing in on playing old songs Not one of the popular music press would give it a mention. I still enjoy playing all the old stuff live but I wanted to show I could do more. It will be interesting to hear what the Buzzcocks, and SLF come up with…or not.

What does the new Blitz material sound like? Does it come in where "New Age" left off? This is the direction I saw for Blitz. I think "The Killing Dream" album would have made a good follow up to the "New Age" single. I think it needed 2 or three more speed tracks. I would like to hear more opinions from people who bought the album.

Are you surprised at Gary Bushell’s openly racist attacks in The Sun? Do you have any contact at all with him now? Would you trust him to help Blitz out now? I don’t read that crap. What can I say….Bushell is a ft white bastard! he was never clear about his political opinions but we suspected that he was a nationalist dickhead. We always talked at length about fucking the system (criminal damage) but Bushell would always edit the strong points out. For the record "45 revolutions" was about the people who preached anarchy but did fuck all about it. Like singing "Anarchy in the UK" whilst standing in line to pay the poll tax is not my idea of smashing the system. Did I pay mine? They’d have to find me first, I only have a mailing address. My views now are the same as always. Fuck the UK and nationalism. You can stuff the flag and a bouquet of barbed wire where the sun don’t shine. I would like to say more but I could fill this magazine slagging the system.

Do you think Blitz got too big too soon? What sort of money did you get for your record sales? Did the success of Blitz keep the No Future label going? Yes it did happen too fast for us to handle. We used to pay ourselves around 120 pounds per week each. A good wage 10 years ago but we just pissed all up a wall. Blitz was the main income for No Future, that’s why they sank when Carl’s "Second Empire Justice (tosswank)" failed, C’mon, own up? Who did buy it? I think they could have achieved something with that album if they had done it under a different name like "Spandau Cabbage". Ha, ha, ha. Another image for Carl. Dressed in curtains with a sequined bowler hat. he could have changed his name to Ii George (I’m enjoying this). If you really want to know Carl now lives in Australia and works with computers (honest). We are still friends. I’m going to send him a copy of this, he’ll love it _ the twat!

What have the new Blitz songs got to say? DO you regret the way some songs you did in the past have been twisted to mean something else by journalists. Is it hard not to be cynical about the whole thing? ‘Don’t care is similar to ‘4Q’. Directed at so called friends who think I should settle down, I live in a town of very small minds. ‘Those Days’ is about people who constantly talk about yesterday and never look forward. ‘All You Want’ _ the spoken words are taken from a film "How many men of less worth than yourself have obtained so many of life’s rewards, whilst you who can imagine so much, have so very little". These guys who write the books on success say you can  achieve what ever you can imagine but how do I get the press to give me a good review (or any review at all). I gave up caring about journalists when a certain prat described ‘Bleed’ as a bootboy anthem. For fucks sake! ‘Bleed’ was about people who are psychologically screwed up and don’t show it until the pin goes.

Anything to add….I’m looking for a label who are willing to promote Blitz and not just cash in on the old stuff.

On Peter and The Test Tube Baies…"We always got on well with the Testies. We had a lot in common, most of it in cans". 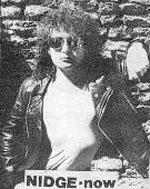 "My views now are the same as always. Fuck the UK and nationalism".