These are links ‘officially’ related to Banksy. 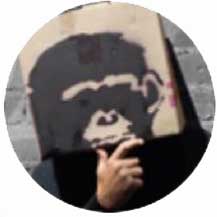 Banksy’s Instagram – Banksy has an account on Instagram first used to publicise his ‘Better Out Than In’ New York residency. It often displays new images before media outlets so well worth following. Pictures On Walls was the last place to sell official Banksy Prints to the public. It operated from 2003 through to the end of 2017. At the time of writing there is nothing on the website save an epitaph. Banksy’s Pest Control Office is the only place that can officially authenticate his original artworks and prints.

In 2019 Banksy launched his Gross Domestic Product store “The homewares brand from Banksy“. Definitely a place to keep an eye on as the most likely source of new Banksy art works for sale.

Banksy also states on his website that he is not on either Twitter or Facebook  so best to avoid accounts on there that pretend to be official.