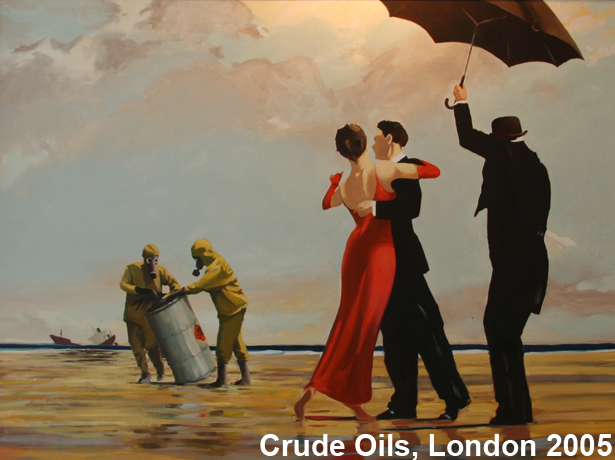 Crude Oils was a “gallery of re-mixed masterpieces, vandalism and vermin” and ran for a over a week in a small shop at 100 Westbourne Grove, London finishing on Monday 24th October 2005. Admission was free – if you could stand the thought of sharing the gallery space accompanied by around 200 live black rats. Environmental health officers came out and checked the show and found everything to be in order despite the protests from other businesses nearby. The artworks were reworked copies of well known standards of the art world including Monet, Warhol, Jack Vetrianno and Van Gogh – mainly paintings but there were also some sculptures on display too. The location – between Notting Hill and Bayswater, is presently occupied by the Whitewall Galleries chain of artwork outlets. Banksy ‘Show Me The Monet’ (after Monet) Banksy – ‘Are You Using That Chair” (after Edward Hopper) Rat at the Crude Oils exhibition An unauthorised addition to the exhibition by Mr Eggs was added shortly after it opened.