It’s a tradition that the location of Santa’s Ghetto is a closely guarded secret until the last minute. Which makes it all the better that this years ghetto is directly in one of the most appropriate locations on the planet; in Manger Square, opposite the Church of the Nativity in Bethlehem.

According to the rather excellent looking santasghetto.com there are three floors in the shop that sticks two fingers up at blatant Christmas commercialism by flogging you stuff. Which isn’t quite as bad as it sounds when you find out that all the money generated by sales in the shop is going to help local children. I could just type out a list of the artists involved but to be honest you’re best off visiting the site itself, which has some very nice pictures of everything (which saves me the air fare and the C02 emissions).

Adding to the locals bemusement are some new additions to the wall including several new pieces by Banksy, an escalator going over the wall by Sam3, a domino wall push over by Eric Il Cane, and a boot through the wall by Sam3 and Wisam with promises of more to come. 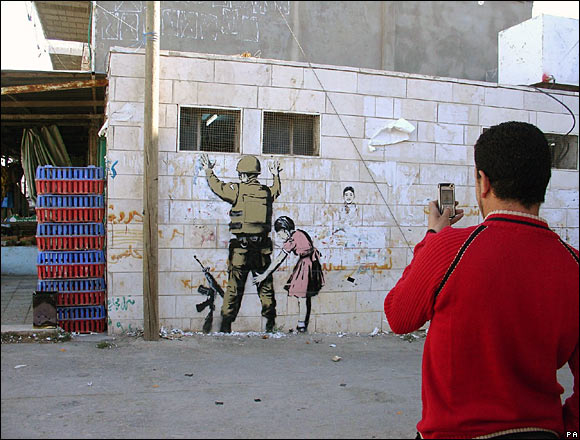 The greatest thing about it all is the fact that the whole thing shines the light back on this area and the fact that it is shit street for many of those who live there 24 hours a day and 365 days a year. It will also make anybody intending to go there think about just what is needed to move from place to place in the area. What do you say you’re going to when speaking to immigration at the airport? How do you get through the checkpoints? If it feels like you’re visiting a prison then that’s because that’s what it is.