Banksy’s Moorfields Eye Hospital rat has resurfaced to be included in a charity auction after being hidden behind a board for years. I’m not sure if the 10Foot tag will be left on the piece (see the photo in the Guardian article)!

“For four years it has been hiding behind a hoarding on a hospital wall, but tonight one of Banksy‘s most famous rat stencils will be revealed again when it goes on sale at a charity auction.

The graffito, Gangsta Rat, which shows a medallion-wearing rat clutching a microphone, appeared on the wall of the Moorfields Eye hospital in London’s City Road in late 2006, but was covered up soon afterwards to protect it – and the hospital wall – from damage or theft.

Now, Moorfields has decided to auction off the work to raise funds for its research into new treatments for eye disease. It will go under the hammer tonight at The Art of Giving event at the Saatchi gallery …” continues on the Guardian

Elsewhere the ever excellent Nuart blog recently picked up on a story of another Banksy piece at a charity auction. This one looks custom made. Read the full story here. 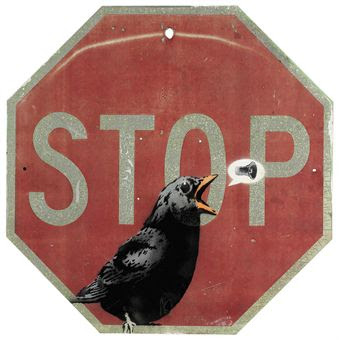 More on the Defenestration project here

Provenance
Donated by the artist, authenticated by Pest Control.