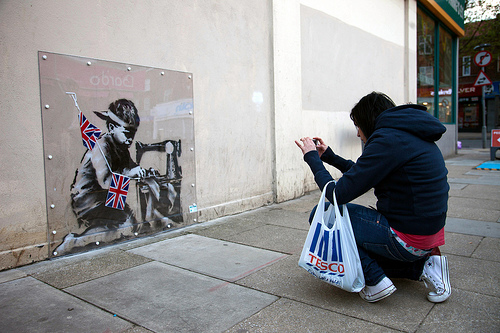 After receiving a plexiglass coating in a near record breaking time Banksy’s bunting piece has remained in place on the side of a Poundland since May 2012. Not any more as witnessed by this photo kindly supplied by Sarah. Now what would appear to have happened in this instance is that someone’s offered the wall owner some money and it’s been cut straight out of the wall. It’s now appearing on a US based auction house site with an price estimate starting at $400K. This always creates a bit of controversy and here ares my thoughts about the whole sorry mess.

The Wall Owner. You can’t blame them can you? Someone sprays something on your wall, then someone offers you thousands of pounds for it and also to pay for the wall to be restored. Worse things could happen I guess.

The buyer who paid for it to be removed it from the wall. They’ll probably try and defend their action by saying they were preserving it or some other crap. It’s just about the money of course. That art was put there by the artist for everyone to see not for some chancer to line their pockets. Absolute tossers without question.

The auction house. If they are a decent outfit I can’t see why they’d touch this. There’s no Pest Control Office authentication that it’s a Banksy piece and there’s unlikely to be. Banksy doesn’t spray stuff in the street to line the pockets of speculators.

Of course writing all of the above is pretty pointless, shit happens.  Joe Strummer neatly summed it up when he said “Greed, it ain’t going anywhere. They should have that on a big billboard across Times Square. Think on that. Without people you’re nothing.”.