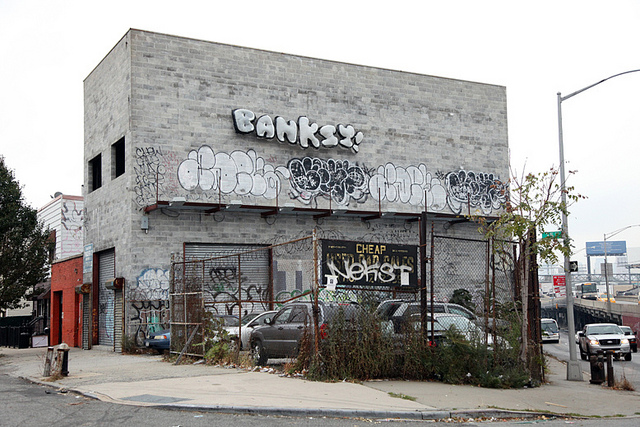 Banksy’s month long residency ended today with an inflatable tag overlooking the Long Island Expressway. The piece didn’t last long though, with the now customary gaggle of Banksy onlookers and the NYPD in attendance two men cut the piece down and tried to make off with it and it all ended up in an unseemly scuffle caught on video. Despite this its fair to say this month has been pretty successful for Banksy. Some interventions have created massive media interest, in particular those that could be attached to a price tag such as the impromptu stall selling genuine Banksy art or the donation of a modified oil painting to a homeless / AIDS charity shop. Others have not gone down so well – there was something of a mixed reaction to Banksy’s comments on the building being built where the World Trade Center once stood. We’ve seen some great art, the tagger leopard and the collaboration with Os Gemeos being particular favourites. The theatrical interventions and sculptures were well received and created quite a stir. All in all after 31 days of activity it’s going to feel quite dull for a while. So long for now, it’s been a blast and we’ll leave the last word to Banksy’s dry narrator for the whole series:

“Banksy asserts that outside is where art should live, amongst us and rather than street art being a fad, maybe its the last 1,000 years of art history are the blip, when art came inside in service of the church and institutions. But arts rightful place is on the cave walls of our communities where it can act as a public service, provoke debate, voice concerns, forge identities. The world we live in today is run, visually at least, by traffic signs, billboards and planning committees, is that it? Don’t we want to live in a world made by art, not just decorated by it?”