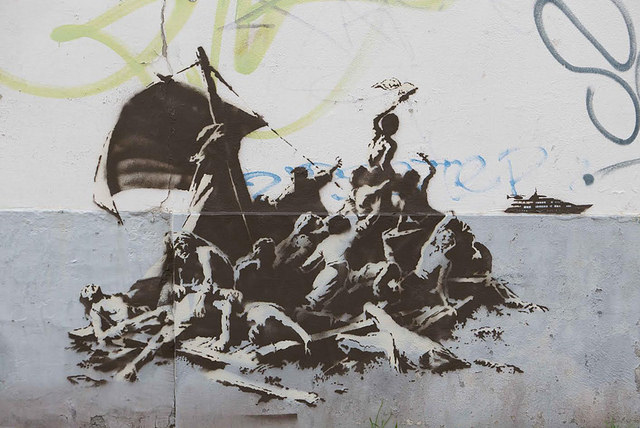 New work by Banksy has appeared in the Calais area (photo: Banksy.co.uk)

While the rest of the world is busy solving its problems through the application of high explosives and automatic weapons the plight of those in the Jungle refugee camp in Calais and elsewhere in Europe has taken something of a backseat. Well, except for that quote about barring Muslims from the US by an odd looking American who treads a fine line between running for President and being sectioned.

So it’s good to see Banksy use his return to outside graffiti pieces to start up the discussion once more. Those people most of us left behind in the summer (I’m excluding the crew from Dismaland and many other volunteers who have been helping with shelter and food and maybe you here) are largely still there with many new arrivals adding to their numbers. There’s now four new pieces in Calais over on Banksy.co.uk but there’s only one that’s really grabbing the attention of media organisations worldwide. It depicts Steve Jobs carrying an early Apple computer and a bag of possessions. It looks like he’s a fugitive and the accompany text says:

“We’re often led to believe migration is a drain on the country’s resources but Steve Jobs was the son of a Syrian migrant.

“Apple is the world’s most profitable company, it pays over $7bn (£4.6bn) a year in taxes – and it only exists because they allowed in a young man from Homs.” Yeah, the point here is clear but despite some reports in the media I very much doubt Banksy is only concerned with ensuring that the next technology entrepreneur makes it across the Channel. He’s pointing out that there is human worth in these refugees regardless of whether or not they make it to the board. Because right now they are being systematically dehumanised, portrayed as savages at the gates, potential terrorists even when they just want a better life. Because that’s a damn sight easier than actually doing something about the situation other than the application of high exp… you get the point. As the other piece in the Jungle say “Maybe this whole situation will just sort itself out”. As if. Elsewhere in Calais there is a stencil of a reworked version of Theodore Gericault’s  painting Raft of the Medusa. Those trying to stay afloat are trying to attract the attention of a luxury yacht in the distance. Maybe Banksy’s intention was not to make the painting too ambiguous. Of course because Steve Jobs isn’t on the raft it hasn’t garnered the same headlines but the message is still there. Maybe its time to decide if we’re the ones on the yacht and if we are whether we can do something to help those on the raft?