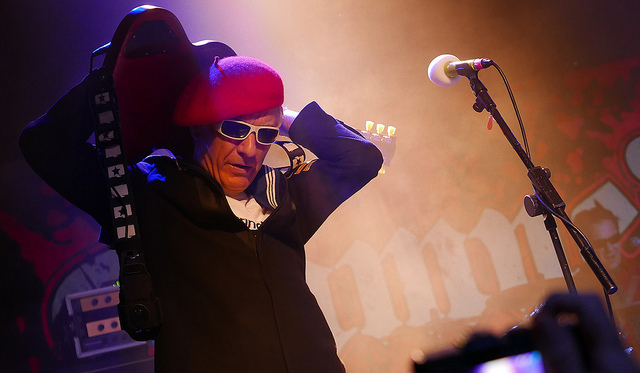 THE DAMNED / THE FEATHERZ Sunday 20th December at the Academy, Islington, London

Having already secured my ticket for next years Royal Albert Hall bash to celebrate the 40th anniversary of punk originators The Damned I wasn’t really looking around for another opportunity to see them. I’d caught them at the Forum and the Roundhouse in very recent times but my careful diary planning all got chucked out of the window when they announced they were playing a much smaller venue – the Academy near Angel. There was no hesitation in getting a ticket – and next May is an awfully long way off after all.

Support came in the form of London three piece The Featherz. Never heard of them before tonight but they turned in a decent set. Part punk, part rock and with more than a dash of Glam they pounded out a bunch of upbeat songs slotting in a couple of well received covers along the way. In fact their chosen brace of Penetration’s ‘Don’t Dictate’ and Marc Bolan’s ’20th Century Boy’ bookend their influences very neatly. They made the most of playing in a larger than normal venue by taking a selfie at the front of the stage having taken the brave decision to ask the crowd to make whatever gesture they thought appropriate behind their backs. The resultant photo luckily and rightfully revealed a very positive reaction. After a lengthy delay the Damned arrived on stage and launched straight into proceedings with a full on version of ‘Wait For The Blackout’. Captain Sensible immediately hit problems though and throughout the first few songs he was constantly switching guitars trying to find one that would actually work. The rest of the band stepped up straight away filling in for him, cracking jokes and generally keep things on track. Eventually everything settled down but the tone for the evening had been set. The band were out to have some fun. Of course the Captain is always the joker but on this night Dave Vanian was also on fine form and matched him throughout blow for blow. The set list saw the band visit just about every corner of their catalogue from ‘New Rose’ – the one that started it all, through the Goth years with ‘Grimly Fiendish’ to their flirtations with major labels (‘Eloise’) and, of course, plenty from those days on Top Of The Pops with a raucous ‘Love Song’ and an anthemic ‘Just Can’t Be Happy Today’. Dave Vanian was in story telling mode, referencing the well known names and more obscure bands along with the films and the actors that influenced their sound and lyrics. He was also having a lot of fun. Dressed in a Father Christmas jacket, hat and beard for ‘Sanity Clause’ and joining in with the rest of the band in relentlessly laying into Paul Weller he was animated and engaging. In the encore he enlisted the help of a guy in the crowd to say the opening line of ‘New Rose’ – “it’s all up to you, if you get it wrong they’re going to hate you”. Thankfully he didn’t and this unexpected guest delivered the line in a slightly mechanical American accent – “Is she really going out with him”? Of course it all then went nuts for a few minutes.

The sense of comedy continued into the encores with the band being joined on stage by Charlie Harper and Gaye Advert for a run through of an old B side track – ‘The Turkey Song‘ which included a cameo by the original subject of the song. After the obligatory set closer of ‘Smash It Up’ was completed  there was just enough time for the Captain to linger behind to lead the audience in a rendition of ‘Happy Talk’ before saying ‘Cheers m’dears’ and exiting the stage. What a night, roll on the Albert Hall. 2 thoughts on “THE DAMNED / THE FEATHERZ – Islington Academy”