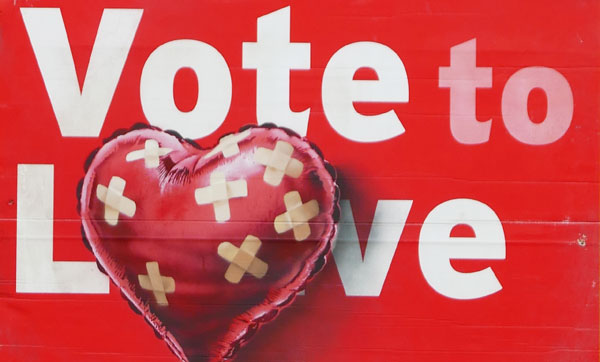 The Royal Academy’s Summer Exhibition has run since 1769 and is open to everyone to submit. That makes the process of being selected a very difficult task as Banksy found out when he put this piece ‘Vote To Love’ in amongst the 20,000 other hopeful entrants. It didn’t gain the selection commitees approval and Bryan S. Gaakman (his pseudonym was an anagram of ‘Banksy anagram) received the standard rejection letter but the story didn’t end there.

Artist Grayson Perry, leading the curation of this years exhibition, directly contacted Banksy about a month later and asked if he would submit an artwork. Banksy put forward a revised version of the rejected artwork and it was accepted and displayed in Gallery III.

The piece appears in the exhibition catalogue as ‘Vote To Love’ (Painting / Spraypint on UKIP placard) and had a price tag of 350 million pounds – itself a reference to the the erroneus sum (or to be more blunt, lie) that Vote Leave campaigners claimed could be spent on the NHS every week if we were to leave the EU.