Banksy’s Turf War exhibition ran briefly in a run down warehouse in London back in 2003. The location (Kingsland Road, Hackney / Dalston) was kept a secret until the last moment and it controversially featured live painted animals. It was open to the public from Friday 18th July for a four days but closed down early by the end of the weekend. Banksy commented at the time “I’m assuming the cops will come down at some point but I’ll be long gone by then,” and indeed they did. They were responding to reports that protestors had locked themselves to the pens containing pigs with police markings, cows with Warhol motifs and sheep daubed in concentration camp clothing styles.

Banksy was quoted in the media at the time:

“I’m doing it because I can. Painting sucks, art sucks – hopefully I’ll get out of it soon and find something a bit more worthwhile do to with my time.” Banksy, 2003

“I don’t like the gallery system and the value of art these days seems to come down to whether one millionaire likes it or not.” Banksy, 2003

The exhibition was hosted in a disused warehousel space. Outside a Banksy Turf War sign on a pallet and a window display let those who made the trip know they were in the right place.

On entering the show visitors were reminded of London’s ever present CCTV with a sign saying ‘If you are reading this notice you have already been recorded by Close (sic) Circuit Television’.

Che Guervara – a long term favourite image for stencils. Che is given a new take in this painting by the addition of hypnotic rotating eyes.

Banksy concentration camp victims wearing lipstick (the reasons behind this striking image are full explained in Banksy’s Wall and Piece book) along with  sheep painted in a similar style.

Banksy Girl with ice cream – street versions of this image also appeared in Brighton on the seafront and a disused building. 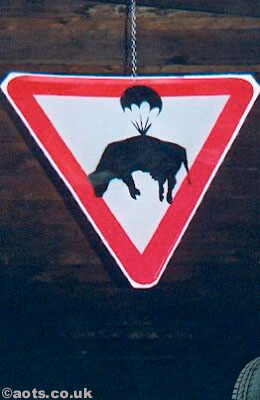 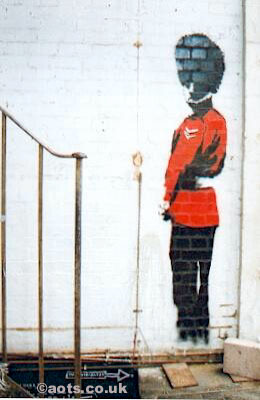 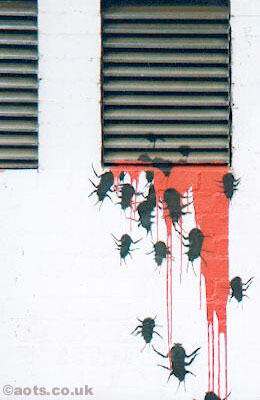 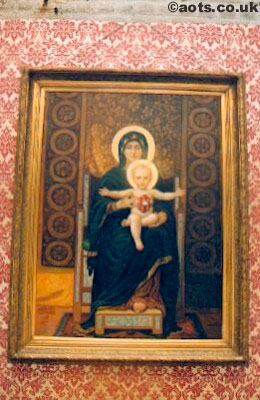 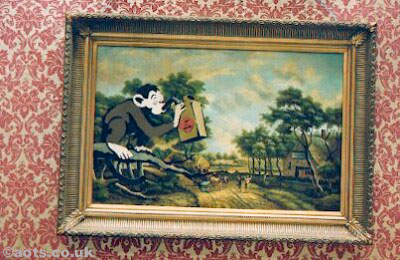 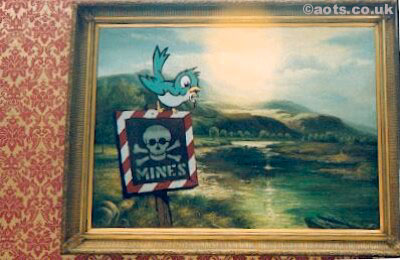 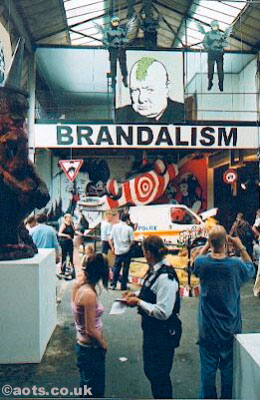 Police on site after animal rights protestors chained themselves to the bars of an exhibit. You can see them in the background of this picture with one having used a D style bike lock around her neck to chain herself to the railings. According to a BBC news report at the time the RSPCA had attended the site and had approved the conditions the animals were being held in. 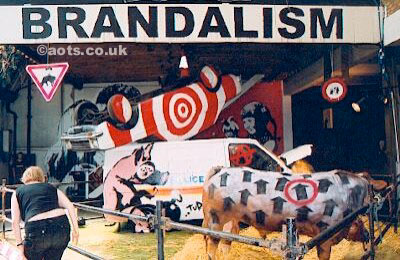 Animal rights protestors chaining themselves to the railings as part of a protest. In the background are repurposed and repainted vehicles. 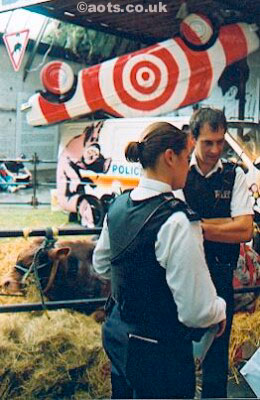 Police at Turf War – with a painted Police van in the background! 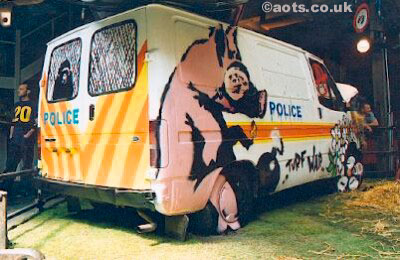 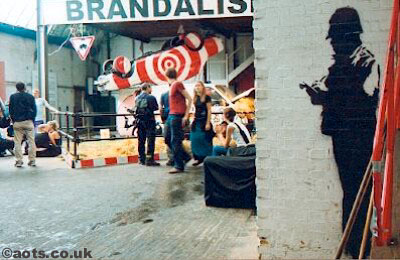 Banksy – an artwork of a Police officer taking notes  at Turf War, as it turned out later this was just about to happen in real life. 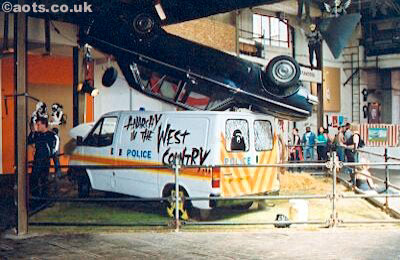 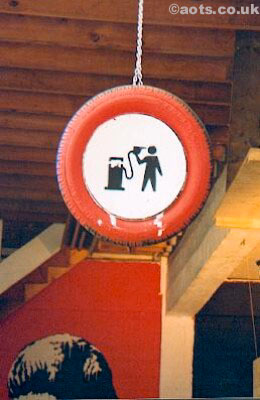 Banksy – petrol shot. This image later appeared on a banner at Brian Haw’s anti war protest in Parliament Square and as part of the artwork series for Blur’s Think Tank album.

Banksy painted cow at Turf War, in the background is a another image that appeared as part of a series for Blur’s Think Tank album. 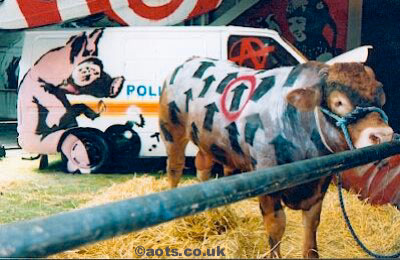 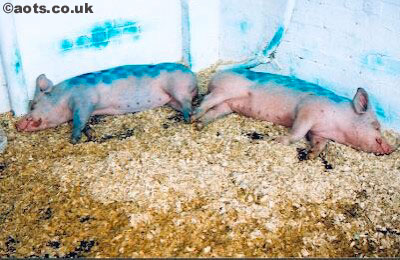 Sleeping pigs painted with Police chequered markings. The live animals were responsible for most if not all of the media coverage for the event. As far as I was concerned they were not being mistreated – they certainly were in better condition than millions of other animals up and down the country on any given day. 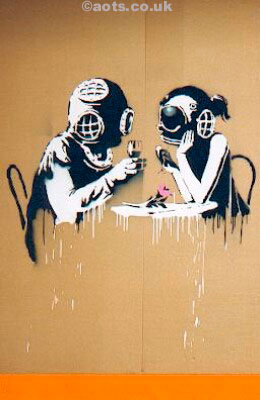 So much time, so little to say – a couple in diving helmets by Banksy at Turf War 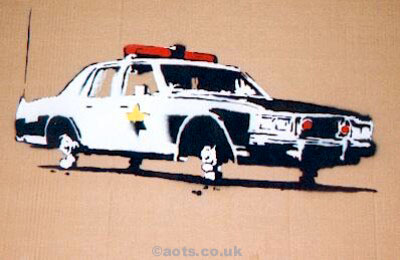 Banksy – US Police car on bricks (on cardboard) 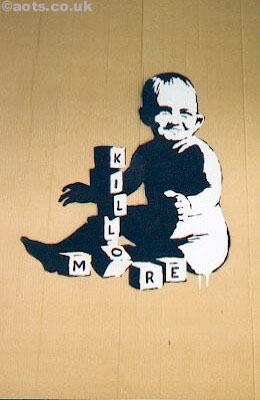 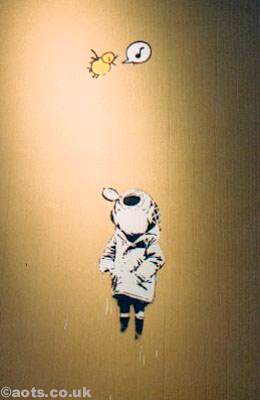 Banksy child and bird on Cardboard 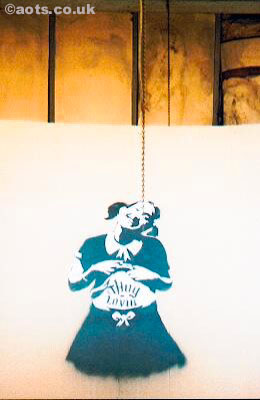 Banksy – ‘Thug Lovin’, a motif Banksy referred to in other guises such as his more well known ‘Thug For Life’ pieces. 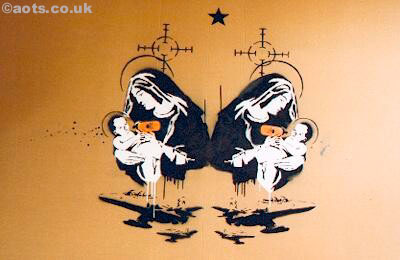 Banksy – Toxic Mary on cardboard. This was also later available as a print via Pictures On Walls – without the target and planes being included. 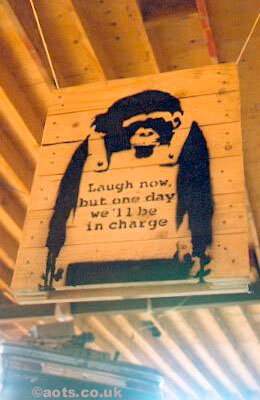 Banksy – Laugh Now But One Day We’ll Be In Charge (on wood pallet, suspended from the ceiling) 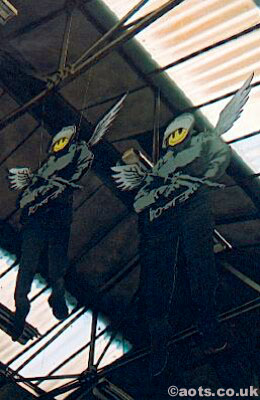 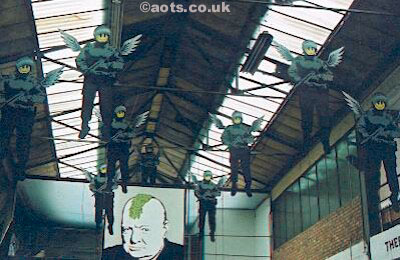 A phalanx of Banksy’s Flying coppers across the ceiling at Turf War with the centre piece of a Winston Churchill sporting a turf mohican in the background. 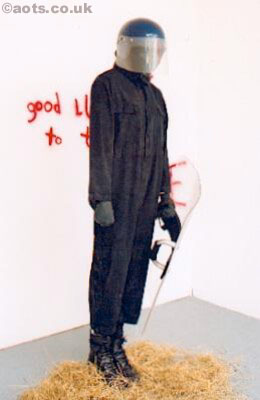 For the window display for Turf War Banksy used a visual trick with “uck tha police” turning into “good luck to tha police” depending on where you viewed it from. 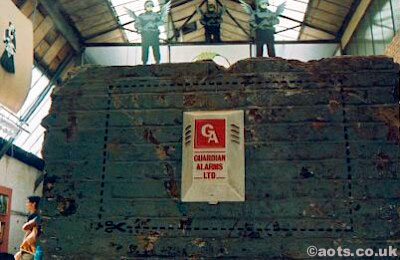 Banksy ‘Cut Out…” alarm on a section of wall 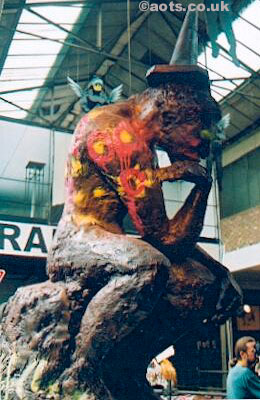 Rodin, the Thinker (with traffic cone). Inspired by Tesco’s Buy One Get One Free (or BOGOF campaign) Banksy moved into sculpture with this piece. The idea was to make two sculptures one to be sold and one to be donated to the public. A version of this later turned up in several locations across London.

Banksy on Turf War in the Metro paper: “I’m trying to make it into a bit of a fairground thing: at least this way the paintings move around and shit in front of you”

On whether it was cruel to use live animals as exhibits? “They don’t seem to care that much: but I’ve been down the farm and spent some quality time with them”.

On advertisers starting to rip off his style: “It’s just weird. When I started doing this, I’d eave the house with a design thinking ‘does it make sense, can you tell what it is, can I get away with it and get home at the end of the night?” Now I have all those things to consider and I also have to think “does it look like an advert for a new media company?”.