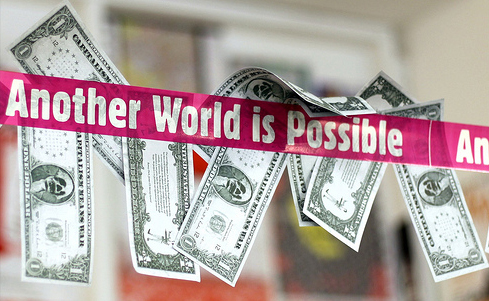 Taking its cue from Seattle as the start of a truly global protest movement ‘Signs of Revolt’ gathers together artists contributions which have informed, recorded and rallied demonstrations worldwide. It has to be said that its an exhibition where you probably already know whether you are interested in it or not. For those who have ‘been there’ in whatever capacity its a mixture of “ah, I remember that” interspersed with new causes, new protests to become familar with. For others its a case of ‘oh no, what are they protesting about now“?

The image of Carlo Giuliani’s bloodied face surrounded by heavy boots never diminishes in its hurt. There’s a fair amount of what is often termed ‘police porn’ – images of riot cops squaring up to and beating demonstrators. These only serve to outrage the viewer to take action against injustice. If you take the time to look around this exhibition you can appropriate many of the ideas presented and turn them into your own. And that’s the point – reinterpret and readjust the images to make them relevant to your concerns, get involved! I’d recommend picking up the free informative booklet ‘Signs of Revolt – Creative Resistance & Social Movements Since Seattle’. It’s a nicely constructed document which extends the purpose of the exhibition well beyond the walls of the space it is presented in.

In short, don’t be a spectator – take part. Millions marched but they never listened