Earlier this year Ronzo created some incredibly detailed replicas of the dragons that mark the entrances into the City of London – albeit with the exception that they had been re-formed to be sculptures of Ronzo’s making rather than the emblem of one of the world’s leading financial districts. He called the silver painted figures clutching coins ‘Crunchy’ and explained at the time that they marked the point where we should be celebrating the end of the recession (the economy had reportedly just grown by an altogether not too convincing 0.1% just as the bolts were being driven in to the pavement to secure the pieces). I managed to track down a couple of survivors (and found the remnants of one that had been lost) a couple of days later. Sadly none now remain but Ronzo has now released a three part video showing their installation. Interesting viewing – especially as this area is one of the most closely monitored square miles in the world. Pictures of the Crunchy’s appear under the video link below. 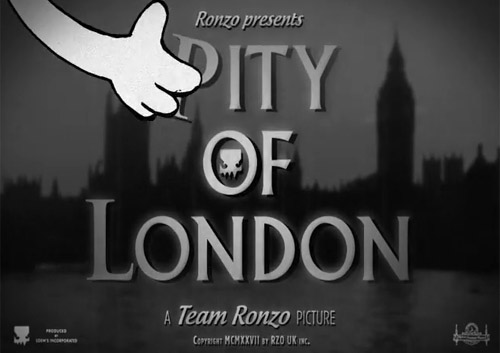