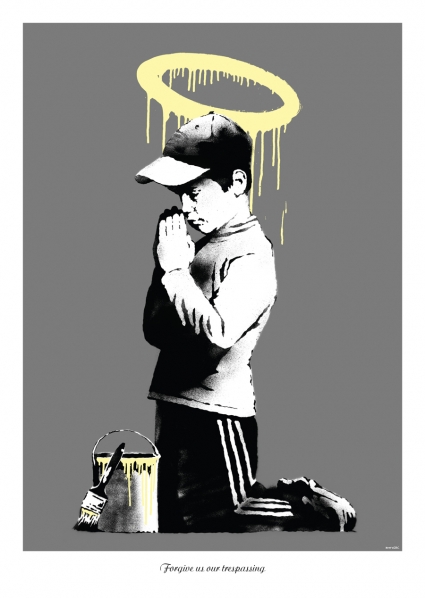 The original ‘Forgive Us Our Trespassing’ poster (source: Don’t Panic)

Don’t Panic gave away a limited edition Banksy poster with their most recent free arts and culture pack.  They first teamed up with the then relatively unknown stencil artist a full 10 years ago with a ‘Stop Esso’ poster (now trading on Ebay for considerable sums of money) and this tie in with Banksy’s film sees them reunited. I thought I’d missed the boat on this freebie but I managed to track down a copy yesterday afternoon in an office’s reception area so there are still some out there!

The image features a praying boy (see below) and via artbelow a copy of the Don’t Panic poster was for a short time on display in London Bridge Underground station. Now Transport For London have a pretty infamous ‘no graffiti’ rule for any advert on their property to the extent that even printed pictures of graffiti are banned. This recently caused problems for the band Massive Attack and might also be the reason that the poster (reproduced below) for Banksy’s film ‘Exit Through The Shop’ on display at the Leake Street cinema never appeared on the Tube. Just in case you’re wondering there is a point to this story so bear with me because here it comes. The poster on display in the station had it’s graffiti halo removed to fit TFL’s guidelines but someone has since come along and added the halo back on in spray paint. Pretty neatly too as they’ve masked off the hat to avoid spraying it and allowed a drip to go down the back of the head just like on the original image. TFL, in their ultimate wisdom. have had the poster removed (I wonder if someone had the sense to keep it) and there’s now just a white space left where the poster was. Which, ironically, is a red rag to a bull for any passing graffiti artist…. 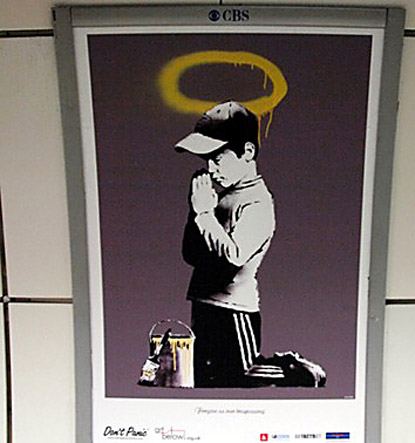 Finally it would appear that the text advert for the film that appeared scrawled across both an advertising hoarding and the surrounding wall on Portobello Road was an illegal hit. A more recent picture shows that the board part has been covered up with the advertising agencies standard blue paper while the text sprayed onto the wall remains untouched(!). See Phil Dicken’s photo on Flickr for how it looks now and below for its original look. Eixt Through The Gift Shop Advert on Portobello Road

There’s been a fair bit of debate on whether the advertising for Banksy’s film is hypocritical given his stated hatred of advertising designed to make you feel inadequate in the past. I can’t really be bothered to add anything to this played out ‘sell out’ argument that’s been around for years now other than to advise you to read the whole advertising quote in his books.  There is more I could say on this matter and the current state of street art in London in general but I’ll save that for a future post. For now I’ll just say this is hardly the worst thing thats happened in recent times and for people to claim that one piece not even claimed by the man denegrates his entire body of work over more than a decade is just ridiculous….