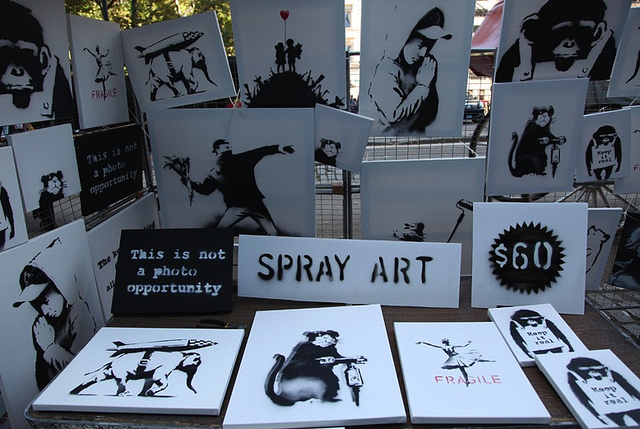 So there have been mystery artist sales before today – think Royal Academy postcards which are purchased before you know who created them – but has there ever been one quite like this?

In his latest stunt Banksy set up a stall in Central Park and stocked it with 100% authentic Banksy canvases and sat a grey haired gentleman on a chair next to them to sell these originals at $60 a pop. In many tourist areas its common place to find all sorts of Banksy prints and even copies of originals. The wise steer clear of these or avoid paying anything much over the cost of production. Today was an exception, these were genuine, but business was slow. In fact it took several hours for the first sale and even then the price was negotiated down by the purchaser to half their ‘value’. You can see what happened in the accompanying video here with just a few people making purchases. Of course those that parted with cash have a real bargain on their hands with Banksy originals such as these changing hands for tens of thousands of pounds. But oddly enough even $420 of sales is not a bad return for a stall holder – it just goes to show that the art stands up on its own without the hype. And as for those lucky people in the video – do they even realise yet just how much their purchases would be valued at? I hope they took care getting them home.