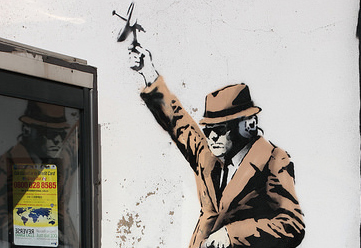 Two new pieces appeared last week. The first was identified on Sunday in Cheltenham and was widely attributed to Banksy but has yet to appear on his website. The second appeared on his website on Monday but its location in Bristol wasn’t reported until later in the week. Since this time they have both gathered massive media attention but for quite different reasons. Cheltenham is home to the British Intelligence  Service’s Government Communications Headquarters or GCHQ for short. It’s where  the Security Service MI5 and the Secret Intelligence Service MI6 carry out some of their work. As part of this they have the power to monitor communications, a process that as Edward Snowden’s leaks have revealed is carried out on an industrial scale. Surveillance is nothing new but the sheer volume and ease with which it can be carried out now is something new. Oddly these stories have a tendency to disappear very quickly from the media, usually accompanied by a terse statement from GCHQ that it’s all nothing to worry about. For example:

“Our work is carried out in accordance with a strict legal and policy framework which ensures that our activities are authorised, necessary and proportionate, and that there is rigorous oversight, including from the secretary of state, the Interception and Intelligence Services Commissioners and the Intelligence and Security Committee”.

Err, so that explains why GCHQ have intercepted millions of webcam images taken in peoples homes via Optic Nerve of which 3 – 11 per cent contained images of people in states of undress? Was this authorised, necessary and proportionate? You’re an adult, I’ll let you decide.

So this piece is topical and it helps to keep the story in the media. GCHQ even provided a quote on the art work: “”This is the first time we have ever been asked to comment on art. “Although we are not qualified critics, we are as intrigued as the rest of the residents of Cheltenham about the appearance of the mysterious artwork. For those who are interested, our website gives a glimpse of what modern-day intelligence operatives are really like, although some may be disappointed by the lack of trench coats and dark glasses.”

Disappointed maybe but hardly surprised given that these are not essential items for modern surveillance.

Since the piece has appeared it has been painted over and restored and become quite a tourist attraction with a steady stream of visitors interacting with the art as captured by this time lapse video. The local authorities have taken an interest in the piece so if you’d like to see it without a plexi glass covering get down to the junction of Fairview Road and Hewlett Road, like now.

The second art work took a while longer than a few hours to pin down. Depicting a couple embracing each other it quickly becomes apparent that their gaze is not fixed on the other person but rather their own mobile phone held behind the others back. Despite being right next to the person they care about they choose to concentrate their thoughts on something or someone else. Once discovered this piece was prised off the wall by the owner of the Boys Boxing Club that happened to be located next door. In a classic case of Finders Keepers he told a BBC news reporter that it was probably a gift from Banksy to solve his cash crisis for his facility to keep errant youngsters off the streets. No doubt if they didn’t take up boxing they’d be doing something anti social like, err, graffiti perhaps? When the reporter asked him if it was his wall he could only meekly reply that it was a wall. I think that this was the moment he realised there might just be some problems with ownership here. That and the two Police Officers turning up to offer their take on the subject. The piece has since been taken away to be displayed in the Bristol Museum (the scene of Banksy’s blockbuster of a summer exhibition in 2009). The original location for the new Banksy piece (Image: banksy.co.uk)

CCTV footage appeared of the installation and some commentators seemed surprised at the level of organisation involved with the camera capturing a white van and several figures working behind coverings to create the piece. Anyone who has read Banksy’s interview with Shepard Fairey will not be surprised by this, I’ll leave you with his take on the subject:

“I’m always trying to move on. You’re not supposed to get dumber as you get older. You’re not supposed to just do the same old thing. You’re supposed to find a new way through and carry on. I invest back into the street bombing from selling shit. Recently, I’ve been pretending to be a construction manager and paying cash to get scaffolding put up against buildings, then I cover the scaffolding with plastic sheeting and stand behind it making large paintings in the middle of the city. I could never have done that a few years ago”. The phone box has rapidly become an interactive art exhibit. Apparently these are not what modern spies look like. Who knew? It’s almost as if the artist was using them as a metaphor. The most photographed phone box in Britain this week Congratulations, you (or your landlord) has just won the lottery / the opportunity to have a constant stream of people larking about outside your house.