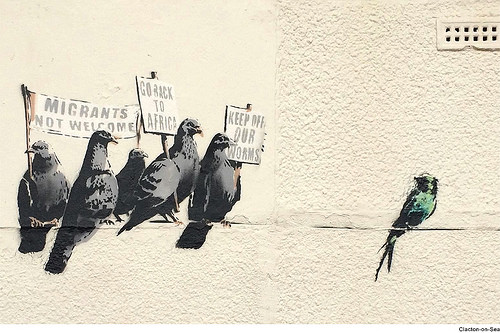 Banksy.co.uk was updated last week with two new pieces in coastal towns, the first in the South in Folkestone and the second in the East in Clacton on Sea. That’s where the similarities end – they both had quite different purposes and quite different responses. ‘Art Buff’ in Folkestone, a title surely with a double meaning? The buffing of graffiti with grey paint is a subject Banksy has addressed before (most notably in New Orleans) but this is a new take on the subject. Before and after photos of the Folkestone piece show that there was originally a crudely painted over piece of writing on a wall that just left a grey mess –  a typical response by town councils the nation over with their widely advertised graffiti reporting hotlines and removal programmes. Banksy has taken this scene and added a little old lady art buff, depicting her attentively inspecting the ‘artwork’  which now sits on a plinth whilst she listens  to an audio guide.  The wording on his website says ‘Part of the Folkestone Triennial. Kind of.’  Which implies his unauthorised participation in an event that occurs every three years that aims to put art on the streets and transform parts of the town into a creative hub (and has been pretty effective in doing so). Despite being covered in perspex in record time it has been drawing a steady stream of visitors and has inevitably started appearing on unofficial Tshirts and fridge magnets on sale in the local area.

The wall before (Photo: Banksy.co.uk) The second piece to be revealed was in Clacton on Sea and has proved altogether more controversial. It depicts several native species of pigeon protesting about an African migrant. Despite it’s relatively obvious message ridiculing  attitudes someone allegedly reported it as racist graffiti and the council buffing teams were promptly despatched and removed it from the wall. Nigel Brown, communications manager for the council, said “We would obviously welcome an appropriate Banksy original on any of our seafronts and would be delighted if he returned in the future.” A statement which completely and conveniently misses the point of why Clacton on Sea was chosen in the first place. The town is shortly to play host to a by election forced by the local Conservative MP’s defection to the UK Independence Party. With migration one of the key topics Clacton On Sea could well be on its way to be known not for its art (like Folkestone) but for the success of a right wing Little Englander party. A Clacton On Sea resident (Photo: Banksy.co.uk, love the way the join on the wall has been used to create a line for the birds to rest on)