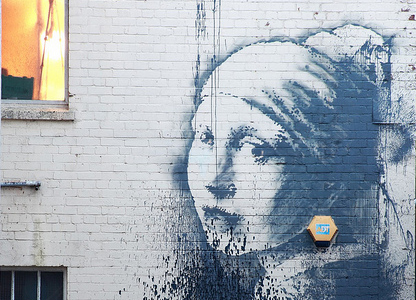 These days you’ve got to be quick to catch a new Banksy piece before it either has perspex slapped over it or gets vandalised itself. Case in point is The Girl With The Pierced Eardrum, a play on Johanne Vermeer’s Girl With A Pearl Earring but with an alarm in the place of jewellery, which appeared in Bristol’s Hanover Place on Monday 20th October. I heard about it too late to catch it running clean, the lower portion of it was apparently hit with black paint within 24 hours but its still worth seeing even now.