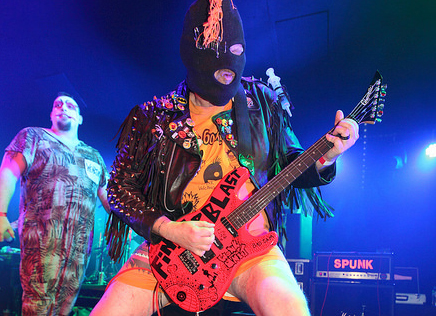 Dammit – missed the first lot of bands including Healthy Junkies who I really wanted to see. Don’t think I’m ever destined to see that band. So Autopsy Boy’s – loved these. They were like the bastard lovechild of Gaye Bykers on Acid (musically) and Carcass (horror / gore based themes). They apologised for their lack of a drummer and for having to make do with a drum machine instead but their driving sound, topped of with samples really suited an electronic beat so well. Seemed to go down a treat and definitely a band to track down live again. When Rabies Babies soundcheck people are checking the venues exits but thankfully when they start up they prove to be an entertaining act. Beyond the capes and ski goggles they created a good rapport with the crowd, not least because after one song they gave out a tray of shots to encourage people to come down the front – a tactic that worked brilliantly. The message behind their songs was often explained – their little diatribe as to what constitutes consent perfectly explained that it should never be assumed. The Yalla Yallas were up for it right from the start. A heady mixture of punk and rock n roll their set was hard to explain at work the following day. “So I saw this band last night and the singer stripped down to his underpants and jumped down into the crowd and encouraged them to do the same before the bassist joined in but left his socks on. Then the singer got down on his knees in front of my mate John and pretended to….”. Err, right. They were damn entertaining though – if you see them you won’t forget them in a hurry. Don’t really understand why but Dirt Box Disco seem to split opinion. Still they’re popular enough and the crowd down the front know all the lyrics – not that they are particularly taxing! Plenty of stage presence and really got things going with the singalong classic “My Life Is Shit” – and who can’t think of a time when that song didn’t apply. Then all of a sudden they were off – would’ve liked a bit longer set next time but not at the expense of the next act tonight…. The Subhumans always turn in a fantastic set, full of classics (especially from The Day The Country Died) but enough surprises in there too to keep it all fresh. Dick is on fine form laying into the fear culture that ever present CCTV and monitoring stories engender. His advice? Let them watch, don’t be scared – they might even learn something from another point of view! Last up tonight are The Mob and they sound phenomenal this loud. Really heavy, their often slow deliberate riffs and beats sound almost Killing Joke at times. Singer Mark’s at times discordant style works perfectly and despite a lengthy string change at one point the atmosphere is somehow retained – these gigs are never about a performance polished to the nth degree and everyone here gets that. If you want perfection try somewhere else but if you want a slew of decent bands with something to say and to keep it DIY then AWOD is what it’s all about.