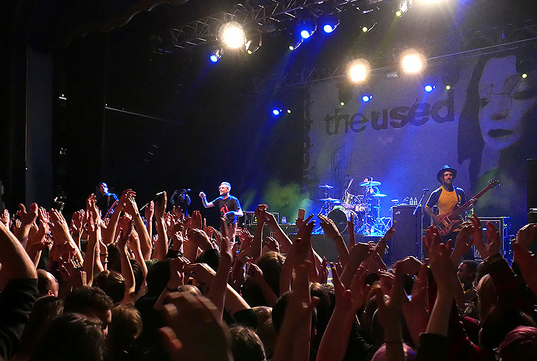 Not a gig I’d normally attend but there was a ticket going spare at the last minute. The New Regime are from the USA and are supporting The Used on their European tour. Some kind of rock, pretty slow, none too exciting. Perfectly competent but to be honest rarely have I seen 1000 people so indifferent to a band playing. Kind of made me wonder what they were getting out of it. They said it was the best reaction they had received to date. Well if two people nodding their heads topped the previous nights….

Coming on to wailing sirens The Used are very much the band that every single person here has come to see. Tonight they are playing everything off their self titled album from 2002. There’s plenty of time for in between song chatter. For me its the first time I’ve heard the songs and they are very much in a straight rock mould with heartfelt lyrics about relationships both good and bad. Stand outs for me were Blue and Yellow but pretty much everything had a memorable chorus. I’ve rarely seen so many women at a gig and they were all singing along – great to see something that appeals to both genders on an equal level for a change. All in all, while not exactly my thing, a decent set (there was nothing else other than the album tracks) and an enjoyable if slightly out of my usual zone experience. This was best summed up by a conversation I overheard with the three guys next to me. “The songs on the new album are banging, when I heard them I cried”. Now there’s something you don’t hear at your average Exploited gig.