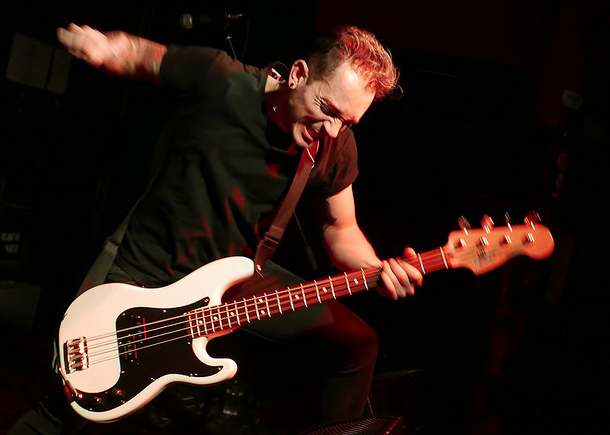 Walking in to the Black Heart to be confronted by a wall of hardcore noise is extreme enough already without having a guy in a mask parading around with a baby in a noose. It’s not even eight yet but Noise Complaint are kicking it hard. It’s all pretty relentless yet not so pretty hardcore but I loved their short sharp shocks of rage. The Migraines continued in the same vein albeit with a bit more catchiness in their songs and a lot more interaction from the crowd right from the off. Singer Matty is a real live wire, constantly on the move spitting beer, leaving the stage behind and generally raising hell. The rest of the band are no slouches either – it takes a lot to give such a committed full throttle performance. Check out any of their videos on youtube but maybe don’t start with the one one from halloween 2014 – work up to that one. Since I last saw them The Ligaments have lost one of the things that made them a unique hardcore punk band – the double bass. Playing now with a conventional electric bass they are no less of a live experience. Drummer Zel really is one of the best out there and both bassist Nicola and guitarist Jake really put everything into their set. So despite being the least thrashy outfit on the night they don’t seem out of place at all with their full on rocking crowd pleasers such as Precint 13 and Back room Wall. Nicola Itro from the Ligaments Tonights headliners, Italian hardcore pioneers Raw Power, need very little in the way of an introduction for anyone with an interest with the thrash scene of the 80’s. Their early output in Screams From The Gutter and the overproduced After Your Brain was legendary at the time. It’s great to hear a lot of this era material played again tonight. Like firing up an old quatrro it all clicks into gear and races by at full pelt. Raw Power do it so hard and so well, even throwing a little Motorhead at the end (ace of Spades of course)! Ears ringing I head out into a deluge of biblical proportions outside. There’s no one else around, a weird feeling after such an intense experience.