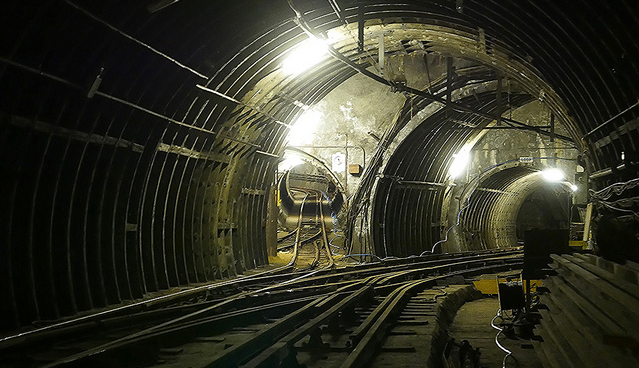 Five centuries of communications history will be on display when the Postal Museum opens its doors to visitors in Clerkenwell, London for the first time in early 2017. Boasting five interactive zones from horse drawn coaches, the introduction of the stamp, through wars and design changes and finally looking towards the future the story that the purpose built centre will tell will be as much about social history as it is about technological change. It does have a real unexpected ace up its sleeve though. Deep, deep underground there is a miniature underground railway  that visitors will be able to ride on as part of their experience.

‘Mail Rail’ was a 6.5 mile line built between Paddington in the West through to the East End. It silently carried the post beneath the capital from its launch in 1927 through to its closure.  A 1km section will re-open in 2017 with the postal bags on its trains being replaced by visitors. It will be a truly unique experience, a heritage railway opening in central London far beneath the city, no doubt carrying plenty of excited children and adults alike on a journey through time. To get an idea of what it looks like before work starts have a look through the photos below and hear what historian Dan Snow has to say about his support for the project. Visitors will be riding trains a lot smarter than this old workhorse. Th 1km journey will take around 15 minutes. The lack of escape tunnels around the rest of the network means its unlikely to be extended at a later date.

Mount Pleasant – where the Mail Rail journey will start and end is at the heart of the railway and underneath a massive and still operational mail sorting office of the same name. One of the Mail Rail platforms at Mount Pleasant – part of the journey through the network. Will some of the decaying character of the venue be erased prior to opening? It’s likely but there will be greater access and still plenty to see.