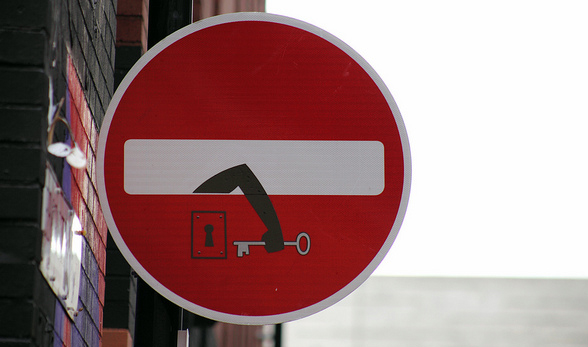 A few old and new pieces photographed recently on my travels:

I’d heard somewhere that Stik’s seven storey high mural in West London was going to disappear sometime soon as the area was going to be redeveloped. It’s a massive piece visible from the Piccadilly tube line going into London from Heathrow. I’ve never seen it up close though and when I got there it turns out it has a little surprise at the bottom in the form of an in part identical image repeated at a fraction of the scale. Stik art on a tower block in Ealing, West London

Elsewhere I had a crafty look at a very nice piece bemoaning late running trains behind some shops in South West London. No idea who the artist is so if you know drop in a comment. Always nice to stumble on a Clet Abraham modified ‘No Entry’ sign – this time in Shoreditch. Finally on a hunt for recent work by Invader I bumped into this rather fine piece by Mr Cenz in Walthamstow. Who knew Walthamstow could look this good in the sunshine?