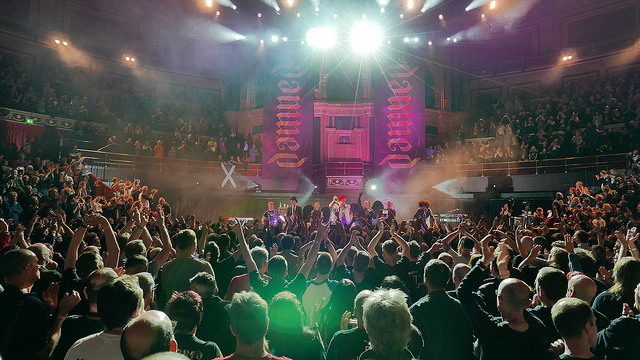 Back in May ’77 The Damned’s manager Derek Block wrote to the Albert Hall to arrange gig for the band enclosing a copy of their recently released LP. The reply could have hardly been terser. The Secretary and Lettings manager refused the proposal as they were “not considered to be a suitable group”. Worse still they added “The record is here for your collection should you need it”. Ouch. Fast forward 39 years and it’s totally different story. Now in their 40th anniversary year the band have just about sold out the place and they and their fans (it was always the fans who were the real problem for the RHA to be fair) are very much welcome in this grandest of concert venues.

Channeling Phantom Of Opera, singer Dave enters not stage left but stage…above. He appears up on a balcony, swathed in a black cape and sporting a face mask and commandingly belts out the opening lines to ‘Nature’s Dark Passion’. The opening slew of songs give the game away, the band are working backwards from their newest material to their oldest and most famous. ‘Democracy’ from the bands 2001 album ‘Grave Disorder’ goes down very well but you get the feeling everyone is just pacing themselves just a little bit. There’s nearly three hours to go. Captain Sensible in a sparkly jacket and his trademark red beret

Things really go up a notch by the time the tracks off ‘Phantasmagoria’ are reached. ‘Street Of Dreams’ has the crowd properly bouncing for the first time along with their surprise hit ‘Eloise’. Ending the first half of their set and only upping the ante higher are ‘Generals’ and the fittingly explosive ‘Ignite’ from Strawberries. Returning after half an hour (to allow keyboard player Monty a ‘wee break’ according to the band’s Facebook update!) the rest of the set comprises a bunch of classics familiar to any Damned fan (Neat Neat Neat, Love Song, The History Of The World), some less well known (Limit Club once again dedicated to Malcom Owen of The Ruts) along with some real live rarities including ‘Life Goes On’. A storming rendition of their first single ‘New Rose’ ends their set and as the band walk off I can hear people around me asking ‘what’s left to play’? Captain Sensible playing slide with a beer can

The answer comes in the form of just one song, the seventeen minute orchestral epic of ‘Curtain Call’. Dave Vanian is joined on stage  by his daughter Emily who plays the violin part. Both decked in black angel wings it’s an inspired choice of song, so fitting for the venue and the moment. Once completed the entire band receive the audiences rapturous applause before departing with of course the Captain showing off his Crystal Palace shirt prior to their appearance at the FA Cup Final.

So, after four decades the Damned have finally played the Royal Albert Hall and it’s been a triumph. Something tells me that had they played 39 years ago things might have been quite different and they may never have been invited back. Maybe the Secretary and Lettings Manager had a point after all…. The Damned at the Royal Albert Hall