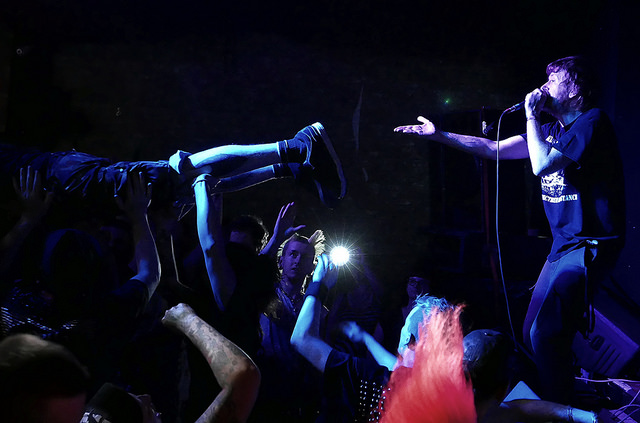 Last year comedian Mark Thomas along with Flowers Of Flesh and Blood and Oi Polloi pulled off a pretty audacious gig on the banks of the River Thames in the heart of Central London. Trespass on the Beach highlighted the trend to privatise public spaces, restricting access that was once free and determining what can happen in any given location. Through a combination of cheek, the authority of a hi-vis jacket and a great deal of behind the scenes hard work and organisation a straight up punk gig was played out to those in the know and a bunch of bemused but open minded Saturday South Bank strollers. A second gig along similar lines is planned and tonight was set up to organise funds to help with the costs of the next event.

Active Slaughter, London based Anti Fascist Vegan punks, split up back in 2010 having been around for most of the previous decade. It’s been a full six years since their last gig but they’re back now and they’re still angry at the same subjects. HLS may be rebranding as Envigo following their merger but changing the name won’t hide the abuse of animals that they carry out. It’s good to see Active Slaughter back and actively calling it as it is with a bunch of hard hitting songs about an array of causes. Flowers of Flesh and Blood hit the stage with a no nonsense straight up thrash out. All rapid fire drumming, sub metal riffing and angry in your face punk vocals they get the crowd going with some violent slamming going on down the front that only quietens down when more bodies join in. The band themselves though never let up in their ferocity with a set full of hard hitters. Flowers Of Flesh and Blood Flowers Of Flesh And Blood

I first got into contact with Oi Polloi and in particular Deek Allen over thirty years ago after a postal interview for my fanzine Crisispoint turned into a gig at the William Morris, and then another and then pretty much the end of me as a promoter at the Robey. One of the most outspoken bands of the time nothing has diminished Deek’s anger in the intervening years and it was great to catch up with him for a bit before they were due on stage.

Things get lively the moment they start. Every song has a direct unambiguous message from the classic ‘Nuclear Waste’ to the more recent ‘The Face (kicking you in the face)’. They dedicate ‘Let The Boots Do The Talking’ to all anti fascists whatever level they operate at whether that be delivering a swift kick from a vegan boot or designing an antifa poster. Their new album Saorsa (more of which on a later post) is raided for a slew of memorable songs – ‘Let’s Go’, ‘Metal Detector’ being a couple of stand outs. The Queen comes in for special attention, this being the date of one (!) of her birthdays. The route one chorus of “Queen Elizabeth, Fuck You” being a fitting tribute for a little old lady who’s “amazingly” managed to get to 90 by simply having the best of everything her entire  life. There’s plenty of audience participation throughout, singalongs and air guitar on stage during ‘Don’t Burn The Witch’. It’s been a great night and I can’t help feel a little disappointed that Oi Polloi are not playing the Beach when it happens again this year. Their lack of inclusion though makes perfect sense – last years gig was so special to just copy it would never be as good. Better try something a little different with a new set of bands and if it comes off again it’ll be another brilliant reminder of what is possible when you just plain ignore the rules that have been set. Deek, Oi Polloi – using a kids book to illustrate how we’re told from a young age what our relationship with the Police should be like. The power of Prog Oi even results in levitation.