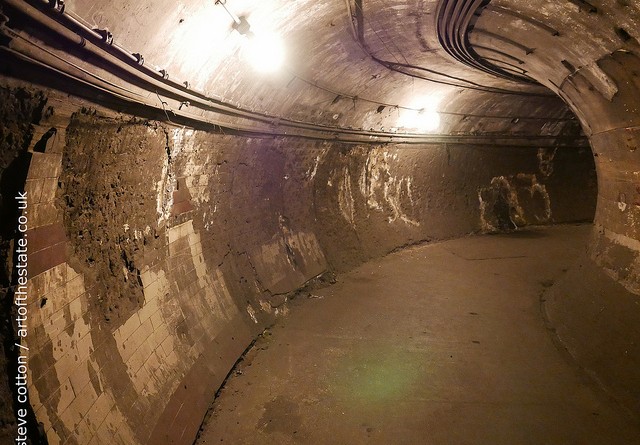 Down Street station was originally opened as a stop on the Great Northern, Piccadilly and Brompton Railway on the 15th March 1907. It was never particularly busy being located in an affluent area of London where many of the local residents had no real need for public transport. The fact that the long passageways to the trains took time to navigate didn’t help matters either and after nearby Green Park and and Hyde Park Corner were remodelled making their entrances even nearer it eventually closed on the 21st of May 1932 and simply became a ventilation shaft for the Piccadilly line. It’s use after this time becomes more interesting and the London Transport Museum are now running occasional small torch lit tours to its time locked depths. The station layout as depicted above shows that there are two back to back platforms accessed by two lifts and a emergency access spiral staircase. You can see that even after descending there is still a distance along a tunnel to the platforms themselves. You can also see that the entrance is in a side street in a well to do area of London which seems quiet even today. What really makes this disused station stand out though was its use during war time…. An art deco style feature slowly decaying away on the side of the spiral staircase.

The Railway Executive Committee (REC) bought the four main train operators in the UK together prior to the outbreak of the Second World War. They were to act not as rivals but in unison to ensure the railway infrastructure could be run and maintained to keep the flow of munitions, materials and services personnel running at optimum levels. To do this they had to set up a secure, bomb proof location where they could communicate with the government of the day and their respective operations. Initial suggestions of locations outside the capital were rejected as the telecommunication services were too limited. Then, despite considerable amounts of money being spent on strengthening them, other selected central London sites were dismissed when it was realised they were prone to flooding or could be destroyed by a 500lb bomb. Oddly enough it was the inaccessibility of Down Street that led to it being selected as the REC’s location – the location 22 metres underground was just what was needed and the decision to convert it took place on the 28th March 1939. Work was kept as secret as possible but it was soon functional – housing around 40 workers working in shifts, 24 hours a day –  including accommodation, offices, mess rooms and with both air conditioning and air filtration (to ensure it could continue to be used in the event of a gas attack). Down Street – telecommunications equipment was essential to maintain links to the rail network and the Government. Down Street Tube Station – steps down to platforms, 22 metres below ground level Down Street Underground station – the area originally housing the lifts was capped off with concrete to provide further protection.

When German bombing raids commenced in September 1940, intensifying throughout October it was decided that the Prime minister of the day, Winston Churchill, could not be adequately protected in the still under construction Cabinet War Rooms. At the suggestion of a member of the REC he took shelter in Down Street for forty nights at the height of the bombing until the Cabinet War Rooms were finished. It’s location remained secret throughout this time with mail being delivered to a nearby address and visitors having to travel to the facility in the drivers cab of the trains which stopped in the tunnel so only the visitor could alight at the platform.

After the end of the Second World War the station returned to it’s use as merely being a ventilation shaft for the Piccadilly Line. Recently the London Transport Museum have started offering tours to small groups of individuals to walk around the tunnels and rooms. It’s still on a live tube line so if you go be prepared that at times you’ll need to extinguish all lights (including the torches needed for some sections) so as not to distract the drivers of the trains as they hurtle past this, the most secret of locations.