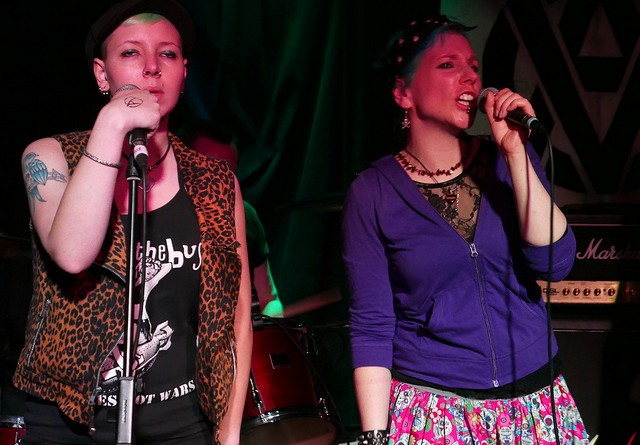 Virus and Geezapunx have already played by the time I arrive at Kingston’s Fighting Cocks venue. There’s a decent crowd in  as the Lost Cherrees hit their stride. Hats off to the sound guy, the band have a powerful and clear mix which makes them such a different proposition these days compared to their eighties releases. Everything is taut with choppy guitars and rock solid drumming. More recent work like the Blair bating ‘Dear Tony’ have real bite while old classics ‘Living In A Coffin” and ‘Blasphemy’ benefit from added drive and aggression. Their cover of Pulp’s ‘Common People’ knocks the original for six too. Anthrax were another Anarcho punk stalwart back in the day with a couple of well received singles. ‘Capitalism is Cannabilism’ – their first EP on Crass records – is just as relevant today as it was back then, maybe even more so. Likewise their Small Wonder Records EP ‘They’ve Got It All Wrong’ with its direct protest punk chorus. All the new material is a in a similar vein and they go down well even if the audience isn’t exactly up and dancing. Sometimes that’s just the way it goes….