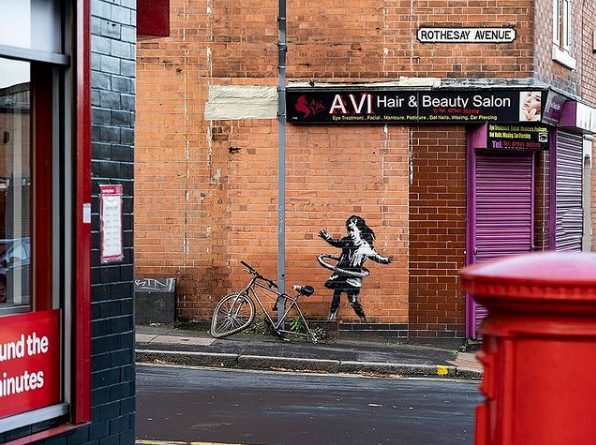 The rumours started straight away but it took a few days for Banksy to post this piece on his Instagram which is generally seen as him claiming it as his work. The work is site specific, a knackered bicycle missing it’s back wheel is chained to a lampost in a scene repeated up and down the UK. Except this is in Nottingham and close to closed Raleigh cycles factory nearby. The child is using the tyre from the broken bicycle to have fun. It seems like her childhood innocence has turned what is a situation that at first seems depressing into something more positive. As a piece of art in created in 2020 it could be seen as a metaphor for so many things.

It’s location in Rothesay Avenue, Lenton, Nottingham quickly became known after residents first spotted it on Thursday 15th October. At the time of installation Nottingham had the highest level of Covid cases in the UK so it came as a welcome diversion to negative news about the city. The council certainly quickly recognised it as a positive addition to the area and quickly installed perspex over the work. Even this was quickly tagged over but this has since been cleaned off and has essentially save the work. The bicycle went missing at a later date and was replaced with another by a local who took it upon himself to spend twenty quid on a substitute. A great thing to do as the piece doesn’t really make sense without it’s accompanying hula hoop donor. It later turned out that the original bike had been removed for safekeeping so it can be reunited with the artwork at some point.

It’s obvious that Nottingham Council quickly worked out they may have a catalyst for change in the Lenton area. Time will tell how this all plays out but fingers crossed it brings positive results for the local residents.

UPDATE: The original bicycle was at first feared stolen but its since been disclosed it was actually just taken away for safe keeping. A kind hearted local has vought a replacement and chained it up to the lamppost to ensure the artwork continues to make sense. In December 2020 it was still visible and looked like the shots below.