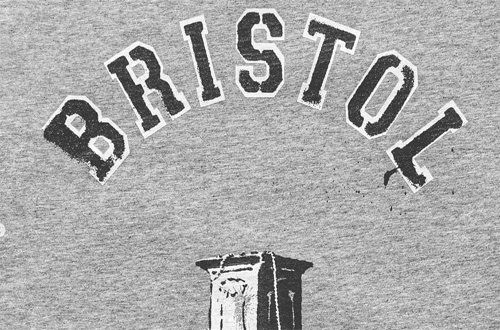 On Saturday 11th December 2021 Banksy released a T-shirt specifically sold in support of the defendants who were facing charges after the toppling of Edward Colston’s statue in Bristol.

Edward Colston was a merchant from Bristol who by his mid forties was heavily involved in the trade of African slaves. Over a thirty year period, during which time he spent a decade as deputy governor, he was part of the Royal African Company who transported 84,000 slaves from Africa. The death of slaves en route to the Caribbean was common with around 3000 dying on an annual basis. They were simply treated as cargo, branded with the owners initials on their bodies and tossed overboard in the event of their demise. Colston himself died in 1713 but a statue of him was not erected in Bristol until 1895, according to the original inscription on the plinth, “by citizens of Bristol as a memorial of one of the most virtuous and wise sons of their city”.

Over the past 100 years in particular, the perception of Colston as a philanthropist (he donated considerable sums to Bristol institutions during his lifetime) has changed, with the source of his wealth leading to calls for his name to be stripped from many of Bristol’s institutions. Particularly contentious was his statue – a celebration of a man whose wealth was built on the blood and bodies of slaves. Arguments have raged throughout the twentieth century over whether his statue should stand. The council, however, were not even considering its removal when in June 2020, as part of a large scale Black Lives Matter protest, a rope was slung around him and he was toppled. From there he was graffiti’d, stamped and knelt on, rolled down the street and into the waters of the harbour. He was later recovered and has since been put on display in a local museum with his full story explained.

It’s important to understand the actions of removing a statue such as Colston’s are not about erasing history. Those responsible want people to know about the evils of the slave trade. That someone should be celebrated as a virtuous person when they had so much blood and suffering on their hands, however, is not something many modern day residents of Bristol will tolerate.

Several individuals were charged with offences relating to the toppling incident (criminal damage) and were sent for trial in December 2021. Banksy’s T shirt recognises their efforts in confronting the difficult past history of Colston and while not impacting the trial itself provides them with monetary support.

“Next week the four people charged with pulling down Colston’s statue in Bristol are going on trial. I’ve made some souvenir shirts to mark the occasion. Available today 11th December from various outlets in the city (all proceeds to the defendants so they can go for a pint)”. (Banksy quote from Banksy’s Instagram)

On the day details of the release timings and locations were given to local radio station Ujima who broadcast the information at 9AM. The locations used were That Thing (stokes Croft), Rough Trade (Nelson Street), Frontline Video in St Pauls, Hakuna Matata in Easton and Friendly Records in Bedminster.

Please note: In response to several requests – no I didn’t get a T shirt and neither do I have one for sale!