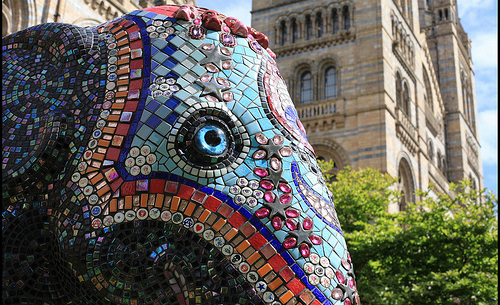 The Elephant Parade in London recently started with a scale and scope in an outside art project that has rarely been seen before. Over 250 elephants were custom painted by artists and some celebrities and placed in central London. It’s not difficult to track one down – they’re often in small herds and kind of stand out. The one I really wanted to find was this one by Carrie Reichardt and Nick Reynolds which was found in the gardens of the Natural History Museum. It features a mind numbing amount of attention to detail which adds extra depth to the explanation of the plight of the Asian elephant by showing how it is persecuted for its ivory, blown up by landmines and more. And if you look carefully round the back you can see a little play on the Turner prize.

More about the project can be found on elephantfamily.org. You can see a BBC video on the installation of Phoolan here and the video of its creation here. Above: This appears on the elephants behind… …and this appears underneath the elephant