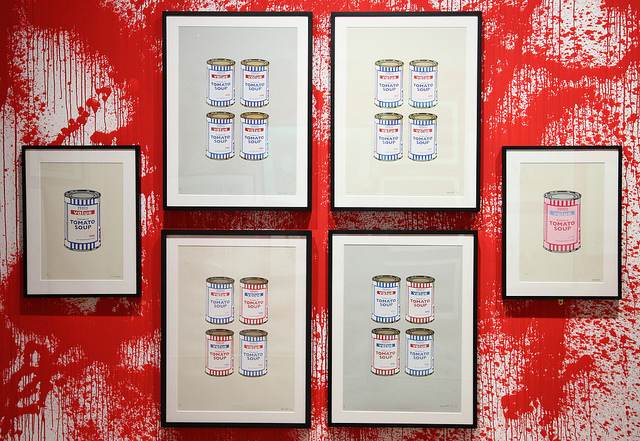 Large scale exhibitions of Banksy works indoors in London are rare things indeed – especially if you exclude those that feature ripped off the wall artworks. The Cans Festival of 2008 (which technically was outside) and Crude Oils back in 2005 were probably the last official events. This is something of a disappointment to many visitors to the capital who often ask this site where they can see an exhibition of the artists works.  Asides from the locations map and the odd unofficial show put on by the Andipa gallery there’s not been much.

Trouncing all previous unauthorised shows and curated by Banksy’s former agent Steve Lazarides this one is actually worth seeing. Yes, the rarified atmosphere of a Sotheby’s gallery with its attendant security guards and receptionists seems partly at odds with the style of the work but if its the art you want to see then this is currently the place to do it. There are a healthy smattering of never seen before in public pieces along with those that haven’t been on show since they were presumably sold at previous exhibitions. Down in the basement are several walls full of some of the rarest Banksy prints you’ll ever set eyes on. Many are labelled as number 3 in their edition size. I’ll leave you to guess who has 1 and 2 (which roughly translates as I don’t know).

Here’s a taster of what’s on show – and don’t forget after the 25th July you’re unlikely to see much of this stuff again any time in the near future.

On the left is Monkey Queen, a stencil with oil and emulsion that was originally at the little attended Glasgow Arches ‘Peace Is Tough’ exhibition in 2001. In the middle there is the never seen in public before Burger King Kid work which featured in Wall And Piece. On the right Sunflowers From  Petrol Station which  appeared at Crude Oils in 2005. By the entrance are some small glass cabinets chock full of contact sheets, rare stickers and other paraphernalia from Banksy’s early career. These give a great insight into some of Banksy’s earliest images, particularly in London. Turf War – based on an inspired defacement of Winston Churchill’s statue outside Westminster. Originally on show high up at the Turf War exhibition of 2003. Nice early piece from around 2000, never seen this one before. In the background is Bullet Proof David from the Barely Legal show The print room downstairs includes six colour ways of Kate Moss Prints from an edition of 20. Ask the price if you dare. Soup cans galore including the print that started it all on the left.