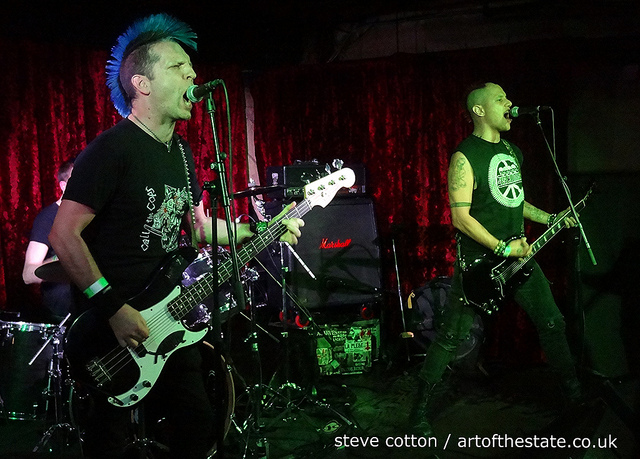 POISON IDEA / THE RESTARTS / DEFCON ZERO Thursday 6th May at the Borderline, London

I first saw Poison Idea back in the early nineties playing with the Hard Ons at ULU. What I remember was a short set that blew away everything in its path. Guitarist Pig Champion was in the band back then but has since been lost. He was pivotal to the band so hearing about this tour I had a couple of concerns. Were PI now going to be some kind of karaoke and would they actually turn up (they’ve got previous in not doing this)!

Defcon Zero have that weird slot on the bill on a night like this. No doubt amped to being playing with such hardcore legends but with a stage time of 7.10pm the reality is that there are bugger all people here to see them as they kick off. They play fast abrasive punk rock full of rage and swearing (they’re the only words I can make out) and by the time they finish the Borderline is filling up and they finally get a decent reception. Hang on a mo, is that Jerry A in the crowd watching? It sure is. I breathe a sigh of relief knowing that PI are in the house. Defcon Zero at the Borderline

The Restarts have the middle slot and get straight down to business. With an alternating two pronged vocal attack they’re a mixture of fury and an occasional skank. I’ve seen them play only recently and tonight sees a familiar set with the best tracks from their Sickness Of The Mind LP and older standards aired. ‘Mia’ is the standout for me, with its heartfelt personal lyrics about Mia Zapata, the vocalist from the Gits who was brutally raped and murdered after a night out in 1993. Added poignancy comes from the mainly young female crowd dancing down the front. Watch The Restarts play Frustration. The Restarts at the Borderline

The Borderline is rammed by the time Poison idea hit the stage. Jerry A appears with a ragged handwritten set list clutched in one hand and a cider in the other. The rest of the band are unfamiliar (except for the return of Eric “The Vegetable” Olson) but oddly look the part. Part metal, part punk and all different sizes Poison Idea don’t really have a ‘look’, don’t actually do a huge amount on stage except one thing – play the most blistering, ferocious punk rock you’re likely to hear. All punctuated by Jerry A’s trademark growling bark. It’s a perfect punk rock voice that cuts through a wall of noise. He’s the main man tonight, directing the set from his list clutched in his hand which only seems to provide a rough guide. He virtually apologises for playing new songs but they go down a storm (the new album is great anyway) but its several of the classics that really get the crowd fired up. ‘Discontent‘ is dedicated to Nigel Farage with its refrain of ‘Listen Nazi, Never Again’ and results in the wildest thrashing of the night – beer flying everywhere and members of the crowd being passed around above head height. “Punish Me’ is another stand out as the band pummel through song after song. There is no walk off walk back on encore routine either. Jerry A checks with the sound man how long they’ve got instead and fills up the time accordingly choosing more songs off that ragged piece of paper. He even takes time out to gross out the crowd a bit by tipping his cider into an old boot someone had brought along and necks it there and then. “Tastes like a size 6”! They end with a raging cover of ‘Motorhead’ which has the crowd slamming into each other before leaving the stage in a wall of feedback. They’ll be back in London in August at the Pipeline – time to get a ticket? Jerry A drinking cider out of an old boot. Class.