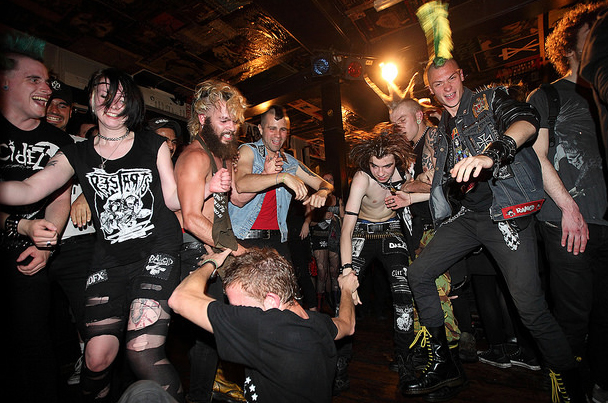 Got to the Dev nice and early only to find out one of the support bands had pulled out so a long, long wait until DSA (Don’t Stand For Anything) took to the stage. Hailing from Reading they play fast hardcore with a real mixed bag of lyrics. That said they don’t fit neatly into the same category as tonights UK82 inspired headliners Blatoidea as they have a definite American kick to their brand of fast and furious punk rock. They’ve been around over a decade now and it showed as they play with ease and a confidence that built up fully through their set. Time again to track down some recordings….  . At one time I couldn’t go to a gig without seeing Blatoidea but that’s eased off of late. Not that it was ever a problem as I love their full on take on hardcore punk. Tonight is meant to be the launch of their new ‘Pesticide’ album but a delay at the pressing plant means that there are no copies on sale tonight. A real shame as when they take to the stage the place is pretty rammed. Dancing had started during their sound check – a sure sign that things were going to kick off as soon as they started. And so they did. Playing much of the their first album ‘Infected’ interspersed with a handful from the new album they had the place jumping, slamming, kicking and crowd surfing. Like I said earlier I’ve seen them a fair few times now but this was by far the best. A lengthy set and a kick ass couple of set closers and they were gone. On this performance that new album is going to be great. Basically mayhem (that’s a description of what was going on rather than the name of a band)!