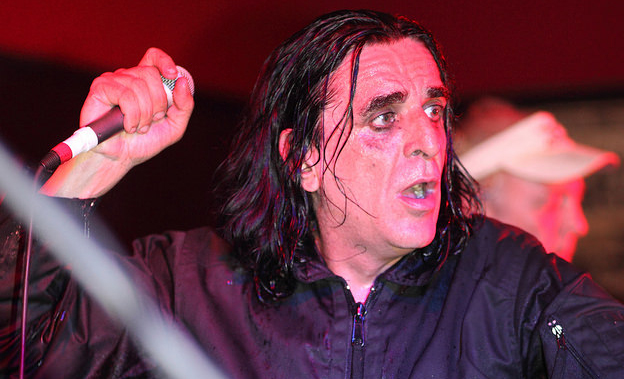 I maybe spend too much time on Facebook at times but it has its advantages. I got to hear about Killing Joke’s intention to play a low key one off warm up gig at Corby’s Zombie Hut venue in time to snag a single ticket before they were quickly all gone. A 200 mile round trip on a week night might be a stretch but you know what, sod it.

The Zombie Hut has a capacity far below where I’m used to seeing Killing Joke and everyone outside is feeling pretty chuffed to be here tonight. There is something of an air of excitement coupled with a feeling of pinch yourself, this is really happening. I doubt anybody is here to see support band Asylums and at what I’d guess is half the age of most of the crowd and a more rocky sound it’s a tough ask for them to win an audience over. So they do the only sensible thing they can, get straight down to business and give it some. By the time they pause to thank the crowd for putting up with them and apologise for their stupid hair (their words not mine) they’re doing alright and receive a decent reception throughout – even venturing offstage at one point to play out in the crowd. Killing Joke’s roadie warns me that I’m about to be deafened – sound advice as it turns out. Standing down the front I watch the band file out and take their positions before launching into opener ‘The Wait’. They’re kicking up a truly ferocious storm already and a glance at the set list reveals a long list of crowd pleasing favourites – next up are the anthemic Love Like Blood, the robotic Wardance, the mellower Complications and the sparseness of Requiem. Singer Jaz Coleman is orchestrating it all, staring intently at the crowd exhorting them to join in whilst guitarist Geordie and bassist Youth play it cool content to provide the backbone of that unique driving sound only coming to fore on the intro to Money Is Not Our God and Pssyche. An extensive set passes by in flash, the smiles on everybody’s faces say that they know they’re in the midst of something special. And all this is happening in part of a former rugby club hall in Corby. It’s a real kick back to the small gigs the band once played in the eighties and as they leave us with Change and Bloodsport I doff my cap to the band and the Zombie Hut. That was one amazing gig that will live long in the memory. Now the drive home…. The Zombie Hut, a great venue in Corby