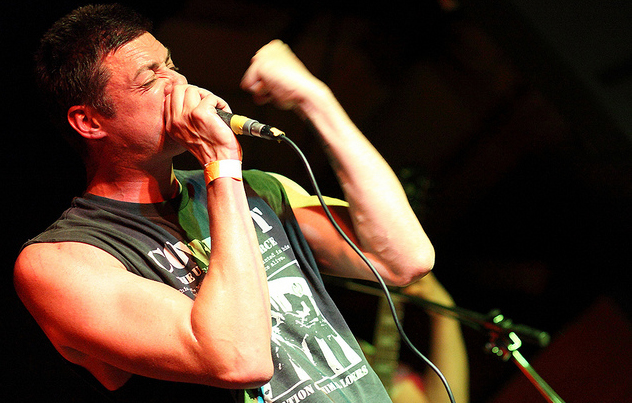 With D.O.A. not due on stage until 11.15pm this was always going to be a late one (we don’t all live in North London and getting home can be a real pain) so I arrived after the first couple of bands but in time for Tropical Nightmare who were new to me. Soundcheck out of the way they moved quickly into a thrashy set with a mixture of English and Portuguese (I think) lyrics. I was probably too far back to appreciate them at the start but moving closer they started to work especially on the later tracks where they really hit their stride with plenty of inventive guitar work. Check out O Prazer De Ser Asceta on the bands band camp. Grand Collapse‘s ‘Far From The Callous Crowd’ was pretty much the standout debut album of last year. Kicking off with False Dawn it sets out its stall with sub metallic punk riffing, fast drums, driving bass and impassioned lyrics and this is exactly how they started tonight, full throttle from the off. Grand Collapse already have a lot of gigs under their belt and it shows, great musicianship in playing with speed but never just for the sake of it and always retaining control they are a firm live favourite already with many. Singer Calvin jumped down off the stage at times to sing in among the crowd and it felt genuine, that they’re the same as the rest of us rather than a forced “aren’t we mad” gesture. Great band to get things properly moving and good enough to headline on their own. I remember well hearing D.O.A. back in the day on Alternative Tentacles. My brother had the Positively D.O.A. EP, a record that seemed so different from the soap and studs sound and look so prevalent back in the UK at that time. I’ve been a fan ever since seeing on them on lots of occasions, most notably with Conflict at Uxbridge in the mid eighties. Never seen a bad gig by them in all that time.

D.O.A. had only recently played the Pipeline in London, couple this with a late time on stage and add on the fact that this was a hastily organised gig it was more surprising how many people turned up rather than how few. Yes, T Chances was far from full but anyone who had made the effort got to see just how good D.O.A. still are. Their set tonight relied heavily on their early work including many of their classics from Hardcore 81. ‘I Hate You’, ‘World War Three’, ‘The Enemy’ were all there along with more recent songs such as ‘Police Brutality’ and a brand new tune ‘Punk Rock Hero’. No ‘General Strike’ this time around but ‘America’ and ‘War’ made up in part for its absence. There was a great synchronicity on display between original singer Joey ‘Shithead’ Keithley and the rest of the band with high kicks and jumps timed to perfection. A four song encore closed off the night with a raucous Fucked Up Ronnie which was changed to Fucked Up David for a well deserved dig at the British PM and a spot on cover of Stiff Little Fingers ‘Alternative Ulster’. For those who made the effort this was a great night to see one of the most legendary hardcore bands out there. D.O.A. were supposed to have hung their guitar straps over a year ago when they played their very last London show. I, for one, forgive them this and am glad to see them back. 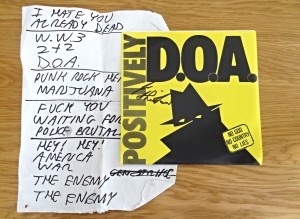 Finally I have my own copy – Positively D.O.A. and signed by the man himself. Cheers Joey!