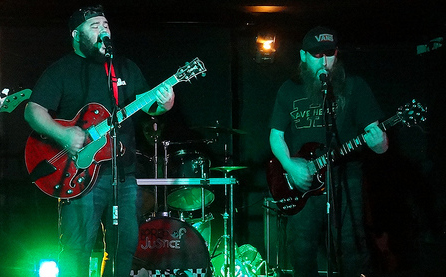 Yeah, sorry about the title but how else do you sum up nipping out to a couple of gigs just to see a band apiece. Of course I’d like to have stayed longer at both but life doesn’t always work out that way.

First off on Friday was a post work jaunt to see Second In Line play at the Phoenix Bar in High Wycombe. Decent venue in a renamed pub slap bang in the heart of the town with an appreciative audience – although quite what the half naked strip show firemen were doing walking round the venue handing out flyers remains something of a mystery. I think their target market was probably elsewhere. Second In Line have been going for over a decade now but this was the first time I’ve seen them. Fast paced, melodic hardcore with more than a dash of humour pretty much sums up their style. The band sounded tight and have plenty of memorable hooks and choruses. Live they kicked up more of a punchy, abrasive sound than their studio recordings would suggest. Set highlights included ‘Joanie loves Chiachi‘ and a closer in the shape of ‘Hope’ by the Descendents which saw the singer lay down his guitar and give it some decent welly in the vocals department.

Saturday and just enough time for a trip to Mill Street in Kingston – one of those rare roads that has its own sense of community rather than being a series of commuter hutches. On a regular basis the residents put together ‘MILLFest’ in a piece of land adjoining the street itself. With something of a village fete feel combining with some decent bands it’s a brilliant and fun event but again time pressures meant my visit was limited to just one band. The Disinclined were on at 3pm in the afternoon and immediately launched into ‘For The Good Of Us All’ – an exceptionally catchy mid paced song that pulled the crowd in. With two guitars, bass and drums the band have a punky edge but also very much tread their own path. I detect a whiff of the Cardiacs, a few more effects pedals being used than most and a sense of fun. They’re quite hard to fit in a pigeon hole and lets face it – that can only be a good thing. Have a listen to them here as they play ‘Fantasy Life‘ – the sound was spot on for such a small and well organised event too. Wish I could have hung around longer to see The Transistor Quarter and more. Matt from The Disinclined