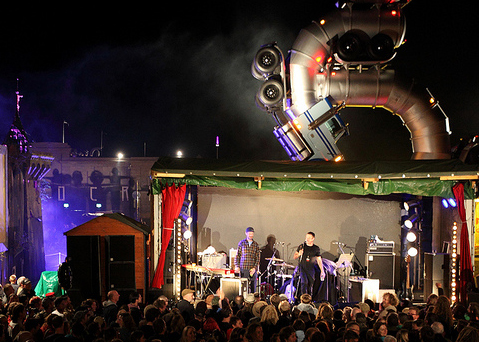 The video for Sleaford Mods current single ‘Tarantua Deadly Cargo’ sees them wandering round a particularly bleak seaside resort set firmly in the reality of an area that relies on a few good days of sunshine a year for its money. So its fitting they are here tonight to play Dismaland in Weston Super Mare. The town itself is actually far more pleasant than most coastal towns which rely on ‘attractions’ to draw in visitors but the duo also blend in perfectly with the dark themes of Banksy’s Bemusement Park.

I’d arrived in the town earlier in the day to have a last look around Dismaland which I’ve covered extensively elsewhere. Walking back to my car between leaving the exhibit and the evening event I could hear Sleaford Mods soundcheck from what must have been a good half a mile away. The air was laden with Jason’s expletives even from this distance. Might be in for a few complaints from the locals later then!

As I’ve seen and reported on Sleaford Mods a couple of times recently I thought I’d hand over to the Caught In The Crossfire blog guys at this point for an alternative view of the whole day. You can find that here and I’ll leave you with just a few photos from the night.