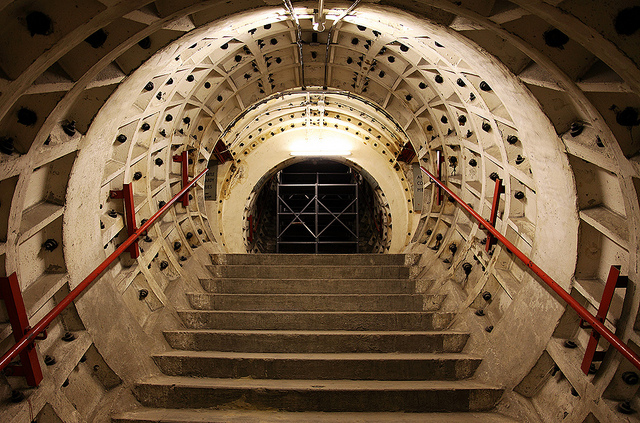 Opened up for a few tours recently as part of London Transport Museum’s Hidden London programme Clapham South is one of eight Second World War purpose built deep level civilian shelters. I joined the first trip down the long flight of stairs into a little bit of history, a subterranean world that offered protection from the bombs above.

You’ve probably seen the pictures of Londoners on the platforms of London Underground stations sheltering from the German Luftwaffe’s Blitz. The reality of these images was that some of the stations were not really that deep and in some instances, in particular at Bank, there were large scale losses of life when they suffered direct hits. The answer to the publics clamour for more secure shelters was to excavate by hand ten new complexes 30 metres below ground with a capacity to accommodate 100,000 people. Two were abandoned early on but the other eight were completed in 1942. They were each connected to a Tube station alongside either the Northern or Central lines and they are still there today in Belsize Park, Camden Town, Goodge Street, Chancery Lane, Stockwell, Clapham Common, Clapham North and Clapham South.

Since the end of the war they have largely remained closed to the public opening briefly for a few special events such as being used as a home for foreign school children visiting the Festival of Britain in 1951 and the arrival of the Empire Windrush carrying migrants from former British colonies in 1948. The last time they were used as large scale accommodation was back in 1956 where after a fire broke out in a dormitory being used to billet soldiers the powers that be decided a similar incident could result in a significant loss of life and withdrew them from use.

Whilst many of the original fixtures and fittings have been removed a good guide and a bit of imagination brings these tunnels to life. Have a look through these photos to get an idea of what life must have been like several storeys underground. Descending down the 180 or so steps from street level to the shelter below. During the Second World War this journey would have been made in the early evening with bedding and whatever was needed for the night before having to be back up and out by 7am the next morning. Entering the tunnels there are signs left over from their use in the early 50’s providing directions to the accommodation areas and the facilities available. With half a mile of tunnels the shelter could hold thousands of people during wartime but it was never filled to its capacity. Entry was by ticket only and with no air conditioning, no ban on smoking it must have been a pretty uncomfortable experience. Not available for use at the time of my visit this tunnel provided a direct connection to the nearby Clapham South tube station on the Northern Line of the London Underground network. Where steel sections were used to construct the tunnels clues are present as to those who were responsible – LPTB in this case refers to the London Passenger Transport Board  that was in existence from 1933 to 1948. The tunnel was constructed during the war when materials were scarce which maybe explains why materials left over from the pre LPTB days when the London Electric Railway was in existence have been used in one particular section. Accommodation was sparse and very limited in space. Time was passed playing games and I’d imagine it was pretty difficult to catch a good nights sleep. The tunnels have been used for storing data archived from companies but have recently been cleared out and cleaned up. The basic bed structures still fill many of the tunnels. Perhaps due to it being repurposed several times over its life there are actually very few real relics from its original use other than the structure itself. It has been used for human habitation again since the war, for demobbed soldiers, for the Windrush generation and even for foreign children visiting the Festival Of Britain. Some graffiti survives in perfect condition due to the lack of bleaching sunlight.